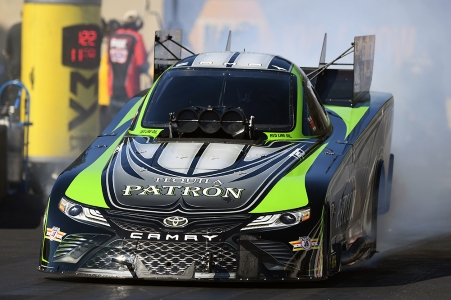 Race Recap:
Team Patrón’s performance consistency from the last several events carried over into the NHRA Nationals in Reading, Pennsylvania.

The Patrón Toyota Camry made solid runs three out of four times during qualifying, and their strong performance yielded a starting position from the top half of the field on race day.

As the sixth seeded contender, Alexis DeJoria had lane choice over 11th qualified Tommy Johnson Jr. in round one. The Patrón Camry smoked the tires early into the run. DeJoria skillfully pedaled the car in an attempt to chase Johnson Jr. down, but he was already too far down track and despite smoking the tires later in the run, was able to cross the beams first.

DeJoria, who was celebrating a birthday on Sunday, will not have to wait long to have another shot at putting her Patrón Camry in the Winner’s Circle for the second time this year. Team Patrón competes next at the NHRA Midwest Nationals in St. Louis, beginning Friday, September 29th.

Quotables: – Alexis DeJoria, Driver
Losing first round on Sunday is never good, especially when it’s your birthday and you’re hoping for a ‘birthday Wally.’ Obviously, we didn’t make a pass like we had hoped we would make. Friday was great for us and we were hoping to do something similar today.

We gave it our all. I had a great light, pedaled it, and got it to recover but Tommy [Johnson Jr.] was down there just a little too far.

I love racing here in Reading. The people are amazing; the track’s just incredible. It’s beautiful here and it will always be one of my favorites. 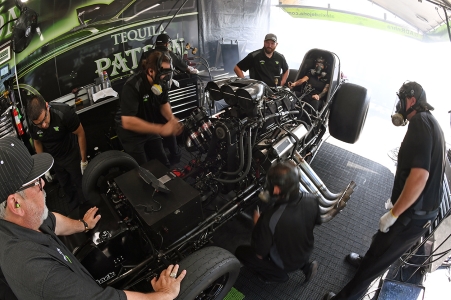 From hand-harvesting the highest-quality 100 percent Weber Blue Agave, to the traditional, time-honored distillation process and individual labeling, numbering, and inspection of each bottle, Patrón tequila is crafted with meticulous precision and care. Though Patrón has grown to become one of the most-recognized and respected luxury spirits brands in the world, it is still exclusively produced in the Highlands of Jalisco, Mexico, in the same small batches and with the same commitment to quality and craftsmanship. For more information about Patrón tequilas and liqueurs, please visit www.patrontequila.com.