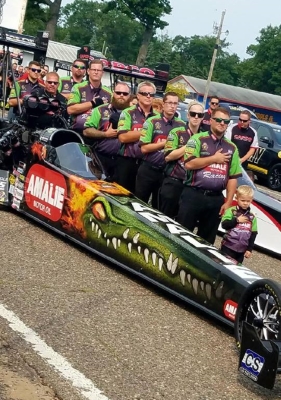 “We didn’t really get want we wanted today,” McMillen said. “We were the fastest loser in round one. I’m pretty sure that doesn’t get you anything. However, we were the only team in round one to get down that lane and that’s a testament to the hard work that Rob Wendland (crew chief) and this team put into this race.”

McMillen continued, “We’re continuing to work hard and learn new things about this car everyday. We want to improve in every aspect of our racing program. Once we start qualifying a little better on Friday night sessions I think you’ll see this team take it to the next level.”

“I’m excited about some of the changes Rob has made this weekend,” McMillen explained. “I can’t wait to get to St. Louis next week.”

Next up for the NHRA Mello Yello Drag Racing series is the AAA Insurance NHRA Midwest Nationals at Gateway Motorsports Park in St. Louis on Sept. 29-Oct.