LAS VEGAS, NV – Cody Coughlin is walking away from Las Vegas with some cash in his pocket and a pep in his step after scoring a career-best NASCAR Camping World Truck Series finish in Saturday’s Las Vegas 350 at the Las Vegas Motor Speedway in his No. 13 RIDE TV/JEGS.com Toyota Tundra for ThorSport Racing.

The Delaware, Ohio native started Saturday’s race from the 12th position and raced through adversity to a sixth-place finish, the best of his career. Coughlin’s previous career-best finish was a seventh-place result at Pocono Raceway in Pennsylvania earlier this season.

At different points in the race Coughlin had multiple issues arise that he fought his way through. At the end of the race’s first stage Coughlin thought he had a tire going down as a result of contact with another truck. Coughlin then had to dodge a multi-truck pileup on the restart to begin the second stage. In addition to all of that, Coughlin had to switch between the primary and backup ignition boxes all race long as well.

“First, I have to thank God for keeping me safe and making sure all of the issues we dealt with tonight ended up not being too serious,” said Coughlin. “I wish we could have scored our first top five of the season, but I’m very happy with our result tonight. It’s definitely something to build off of. I’m very thankful for all of the hard work from my ThorSport Racing guys. They did a great job giving me a fast RIDE TV Toyota Tundra right off the truck this morning, so I definitely have to say thanks to my guys, starting with Michael (Shelton, crew chief) and Rich (Lushes, truck chief). I also just want to say thank you to my parents (Di and John) and my sister, Kennedi for always being my biggest supporters. I love having them at the track with me.”

Coughlin’s next race will be at the 2.66-mile Talladega Superspeedway on Saturday, October 14th. Coughlin is a big fan of racing at the superspeedways of Talladega and Daytona International Speedway and is already looking forward to the race two weeks from now.

“I have a lot of fun at those tracks. We had a strong run going at Daytona earlier this year before we got caught up in that big wreck on the last lap. I’m excited to see what’ll happen two weeks from now and hopefully we can give Duke and Rhonda Thorson (team owners) a great finish.” 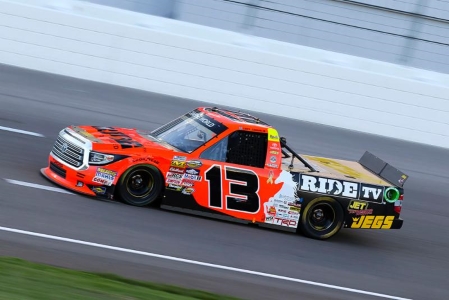 For more information on Cody Coughlin and Team JEGS, visit codycoughlin.com and follow Cody on Twitter, @Cody_Coughlin. Follow Team JEGS on Twitter, @TeamJEGS, and “Like”JEGS Performance on Facebook. Follow ThorSport Racing on Twitter, @ThorSportRacing, and visit them online at ThorSport.com. If you need more information regarding ThorSport please contact Jessica O’Brien via email at jessica@edgehillmanagement.com. Any other inquiries for Cody Coughlin can be sent to Bob Dillner via email at bd51sports@gmail.com.

Ride Television Network, Inc. is a privately held corporation based in Fort Worth, Texas. The company was formed in 2011 for the purpose of launching a 24-hour, high definition, television network. RIDE TV launched on October 1, 2014 in the United States and is now available internationally. The network features high-quality television programming showcasing both English and Western disciplines and lifestyles and includes live events, reality shows, talk shows, children’s programming, documentaries and more. For more information about RIDE TV, please visit www.ridetv.com.