July 23, 2015 , Auburn Hills, Mich. – Mopar has announced the launch of ordering for the new Mopar Dodge Challenger Drag Pak, with the option of the brand’s first-ever offering of a supercharged 354-cubic-inch Gen III HEMI® engine or a naturally aspirated 426-cubic-inch Gen III HEMI engine. Pricing will be cubic-inch appropriate, with a manufacturer’s suggested retail price (MSRP) of $99,426 for the naturally aspirated 426 version and $109,354 for the 354 supercharged race car.

The ordering kickoff was announced at the Mopar Block Party in Golden, Colorado, a free fan event held on the eve of the Mopar Mile-High National Hot Rod Association (NHRA Nationals) drag race weekend. The three-day event features Sportsman racers who compete in NHRA sanctioned competition and for which the newest version of the Mopar brand’s modern day package car was designed. 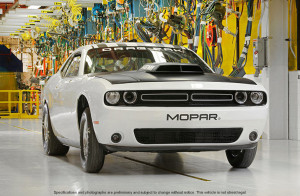 Racers accustomed to being quick off the starting line also need to be equally speedy in raising their hands for one of Mopar’s new drag machines. Only 60 Mopar Dodge Challenger Drag Pak vehicles are slated for production, with 35 built of the supercharged Gen III HEMI® engine and 25 of the naturally aspirated engine.

Ordering will be available through authorized Dodge dealerships. Additional information on the new Mopar Dodge Challenger Drag Pak is available at www.mopar.com/mopar-drag-pak.

Under a factory hood is the supercharged 354 HEMI engine, with a cast-iron block, forged steel crankshaft, Mopar spec camshaft and a custom performance engine calibration. The naturally aspirated 426 Race HEMI engine is built off a Mopar aluminum block with pressed-in steel liners and aluminum cylinder heads. Like the supercharged engine, the 426 HEMI also includes a custom engine calibration. 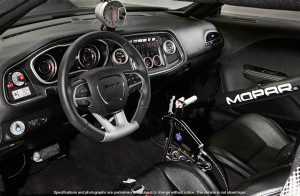 The new Drag Pak features a race-prepped automatic transmission, upgraded from the previous generation vehicle, for both the 354 and 426 engine options. Each engine version carries a unique graphic identification package.

The vehicle’s front suspension sports a unique Mopar K-Member and suspension geometry, with double adjustable compression and rebound struts. At the back of the car is a four-link suspension with Panhard bar, Strange Engineering housing and 40-spline gun drilled axles with a 9-inch aluminum third member, a 4-inch diameter driveshaft, shocks with adjustable compression and rebound and an anti-roll bar. The rear axle mounting has been strengthened from the previous generation Drag Pak to help the car launch faster and harder.

The new Drag Pak includes the Dodge Challenger front and rear fascia trim and a redesigned full roll cage fabricated to NHRA specifications. The cockpit reflects the Dodge Challenger interior, but with the addition of a Mopar gauge pack, driver and passenger lightweight racing seats, along with a safety net and a five-point harness. The Mopar Drag Pak is equipped with 15-inch front and rear lightweight wheels displaying the unique Mopar logo, Hoosier drag radials with front tires that measure 28 inches in diameter by 4.5 inches wide, and rear tires that are 30 inches in diameter by 9 inches wide.

The vehicle also includes a more user-friendly hood, hinged at the rear to make between-rounds under-hood maintenance an easier task. Another small but essential detail that racers will appreciate is the addition of integrated trailer tie-down loops on the front and rear of the new Drag Pak.

The resulting new vehicle is the next step in the evolution of the Mopar package car, which began in the early 1960s with factory production of Max Wedge package cars. In 1968, famously coveted 426 HEMI-powered Dodge Dart and Plymouth Barracuda package cars were unleashed. In 2008, Mopar delighted speed lovers by announcing the first drag race, factory-prepped package cars in 40 years – the first Mopar Dodge Challenger Drag Pak. Incarnations of the Drag Pak have included more than 150 V-8 Challenger Drag Paks, an additional 50 V-10 versions and 426 Race HEMI upgrade kits.

World of Mopar
Mopar has evolved over more than 75 years into a brand with a mission to enhance the ownership experience for all FCA brand customers worldwide. The statistics below illustrate Mopar’s global scope:
More than 500,000 Mopar parts and accessories are distributed every year
The Mopar brand has a presence in more than 150 markets worldwide
52 Parts Distribution Centers (PDCs) are in operation
Mopar products reach 14,800 ship-to locations around the globe
27 Mopar customer-contact hubs are in operation worldwide
The brand’s global footprint includes 19.5 million square feet of warehouse space and 43 commercial offices

About Mopar Brand
Mopar (a simple contraction of the words MOtor and PARts) was trademarked in 1937 with the launch of an antifreeze product, but it truly made its mark in the 1960s during the muscle-car era. From Mopar Performance Parts to enhance speed and handling for both road and racing use, the brand soon expanded to include technical service and customer support.

Mopar parts are engineered together with the same teams that create factory-authorized specifications for FCA vehicles. This offers a direct connection that no other aftermarket parts company can provide. A complete list of Mopar accessories and performance parts is available at: www.mopar.com.