DETROIT (Oct. 15, 2015) – The final three races in the NHRA’s Mello Yello Drag Racing Series beckon for Team Chevy drivers, starting with this weekend’s 31st annual AAA Texas NHRA FallNationals from Texas Motorplex just outside Dallas. With the NHRA’s Countdown to the Championship entering its second half, Chevrolet competitors are positioning themselves for a final push in points.

Five Team Chevy drivers are in the top-five of their respective NHRA divisions. Four of those are in Pro Stock with the Chevrolet Camaro SS. Elite Motorsports’ Erica Enders holds a 72-point advantage over fellow Chevy Camaro SS driver Greg Anderson from KB Racing. Four-time Pro Stock champion Anderson has a strong history at Texas with three Pro Stock event wins, and he is a past- No. 1 qualifier there, too. Enders was the No. 1 Pro Stock qualifier in 2013 and was the 2012 event runner-up. 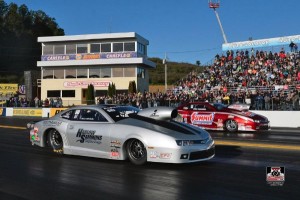 No driver in Pro Stock made a bigger jump in points during the last NHRA event at Reading (Pa.) than Chris McGaha in the Harlow Sammons of Odessa Chevrolet Camaro SS. In winning his third Pro Stock race, he jumped from sixth to third in points and finds himself in the thick of the class championship.

Jason Line, Anderson’s KB Racing Chevy Camaro SS teammate, is a two-time Dallas event winner and is in need of a strong weekend to boost his eighth-place standing in points. The same can be said of Shane Gray in his Gray Manufacturing Tech Chevrolet Camaro SS; he is a two-time FallNationals runner-up, was last year’s No. 1 qualifier in Pro Stock and stands ninth in points.

His brother, Jonathan Gray in his Gray Motorsports Chevrolet Camaro SS, was a semifinalist in last year’s Dallas event. 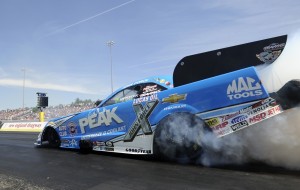 John Force Racing will have its four-car contingent in the Mello Yello Series’ Nitro classes this weekend. In Top Fuel, Brittany Force will look to continue her strong run over the last four events in her Monster Energy Drink/Chevrolet Top Fuel Dragster. It includes three semifinal berths in the last four events. Force was the No. 1 qualifier two weeks ago at Reading and advanced to the semifinal round. Her performance moved her to third in points, the highest standing of her Top Fuel career.

All three John Force Racing Funny Car drivers have won at Texas. Leading the way is John Force, sixth in points and a seven-time winner at the FallNationals – his most recent coming in 2005. This weekend his Chevrolet Camaro SS Funny Car will be in the colors of Traxxas Radio Control Cars, which is based in Texas.

Traxxas also is on the Chevrolet Camaro SS of Courtney Force, last year’s Funny Car event winner. Twice, she has been the No. 1 qualifier (2012 and 2014). Although she is not part of the Countdown field, Force did make a mark in last year’s with two event victories.

Robert Hight stands 10th in Funny Car points, and like his John Force Racing teammates Hight has a strong history at Texas from which to draw. The driver of the Auto Club of Southern California Chevrolet Camaro SS twice won the FallNationals and three times has been the No. 1 qualifier.

In addition, a group of nine Chevrolet COPO Camaro drivers are part of the Stock and Super Stock classes this weekend. Among them are three-time Keystone Nationals event winner Bruno Massel.

Team Chevy also will welcome fans to its Chevrolet Performance Display during the weekend. It will include a number of Chevrolet’s award-winning production vehicles, examples of Chevrolet engines, and a selection of performance parts and accessories that are available for fans to purchase from their local Chevrolet dealer.

All the action from Texas Motorplex can be seen Sunday on ESPN2 via tape delay. Qualifying coverage airs at 4 p.m., with same-day eliminations coverage starting at 8 p.m. ET.

ROGER ALLEN, CHEVROLET RACING PROGRAM MANAGER, NHRA: “Texas Motorplex is a unique venue for the NHRA Mello Yello Drag Racing Series. With the drag strip made of concrete, the opportunity for big speed and low times is high. The event’s new position in the Countdown to the Championship makes it even more critical for championship contenders.

“Several of our Team Chevy drivers have made a habit of winning at Dallas over the years. John Force leads the way with seven while John Force Racing Funny Car drivers Robert Hight and Courtney Force have found success there, as well. John and Robert need to win rounds to climb higher in points, so this is a welcomed stop for them.

“The Pro Stock category again looks to be hotly contested between a number of our Team Chevy drivers. Jason Line, Shane Gray and Greg Anderson each have multiple event wins at Texas. Points leader Erica Enders, Jonathan Gray and Vincent Nobile have strong records there. Plus you can’t count out Chris McGaha with three victories this year. 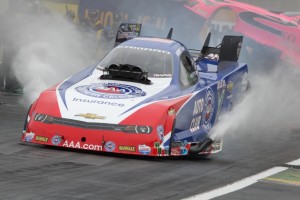 ROBERT HIGHT, JOHN FORCE RACING, AUTO CLUB OF SOUTHERN CALIFORNIA CHEVROLET CAMARO SS (Two-time FallNationals Funny Car event winner): “Winning the AAA Texas FallNationals would be huge for us. We haven’t started the Countdown the way we planned, but there are three races left and we have had success at all three. There is still a championship on the line and we want to do everything we can to make sure that championship trophy comes back to John Force Racing.

“Our mindset hasn’t changed all season. We had a tough weekend in Reading and everyone was kind of behind the eight ball. You can’t get discouraged by a bad race or a couple bad races. Every race you have to go into the race thinking you have a chance to win and this AAA Texas team definitely thinks that.

“We have had some tough match-ups but we are taking responsibility ourselves and not blaming anyone. This is a strong team and I am looking forward to getting to the Texas Motorplex and having a good weekend. The weather should be good and I am excited to get to the original super track.”

“The Motorplex is the first super track. When (track owner) Billy Meyer built the Motorplex he built it as a performance facility and premier facility for the fans. I think the fans will see some exciting racing when we are there. Billy Meyer was a Funny Car racer and his vision for the Motorplex has led to tracks like Las Vegas, Charlotte and Chicago.

“We owe Billy a lot and you want to do well at the Texas Motorplex because this is a AAA Texas race, but also because we have a lot of fans in Texas and the Dallas area. You see them on the ropes and they are cheering for us all weekend. I love the fans in Texas and it will be a busy weekend but also a weekend where I hope you’ll see this AAA Texas Chevrolet Camaro Funny Car going some rounds.” 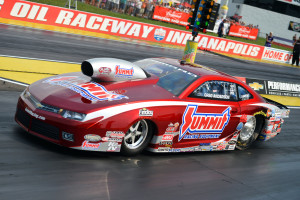 GREG ANDERSON, KB RACING, SUMMIT RACING EQUIPMENT CHEVROLET CAMARO SS (Three-time FallNationals Pro Stock event winner): “We dug ourselves into a hole the first two races of the Countdown, so we need to dig ourselves out. We got back in the game in Reading, and now we have to do really well in Dallas if we want to stay in this thing. We have no room to make any mistakes.

“Dallas has been a good race for me in the past, and a good race overall for the KB Racing team. The management at that particular facility is very good, and the racetrack itself is great. This is a very good race to have on the schedule during the Countdown, and I’ve had the opportunity to wear that cowboy hat in the winner’s circle a few times. That’s always fun. It’s just a neat deal that you look forward to and hope for. We hope to get it done this weekend.

“At the beginning of the season, I wasn’t quite as optimistic as I should have been. But as the season went on, I could see that we were going to have a great shot in the playoffs. So far in the Countdown, my Summit Racing Chevy has earned an A+. I just need to go up there with an easy mind and have confidence in myself and in my car. That will be at the top of my list of things to do this weekend in Dallas, and we’ll take it from there.”

Bold – In Countdown for the Championship

About Chevrolet
Founded in 1911 in Detroit, Chevrolet is now one of the world’s largest car brands, doing business in more than 115 countries and selling around 4.8 million cars and trucks a year. Chevrolet provides customers with fuel-efficient vehicles that feature engaging performance, design that makes the heart beat, passive and active safety features and easy-to-use technology, all at a value. More information on Chevrolet models can be found at www.chevrolet.com.