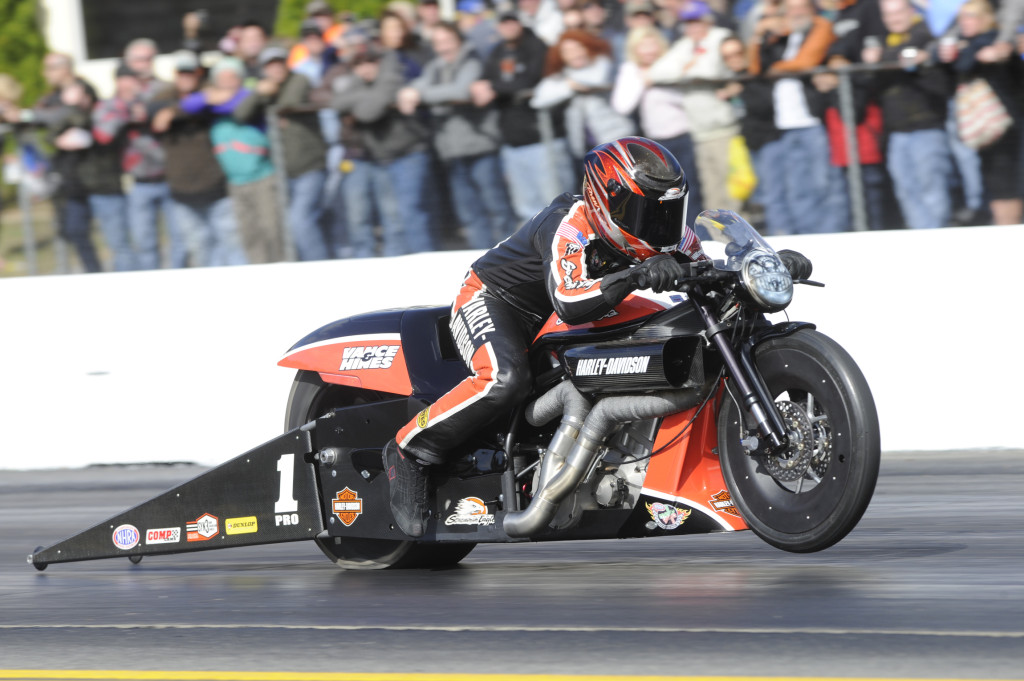 ENNIS, Texas – It took all of one race in the NHRA Mello Yello Drag Racing Series Countdown to the Championship for reigning Pro Stock Motorcycle world champion Andrew Hines to take the points lead, something he has not relinquished through the first half of the NHRA’s six-race playoffs.

But just as quickly as Hines grabbed that lead, jumping from third to first with a win at the Countdown opener in Charlotte, the four-time world champion knows it can disappear just as quickly in a class loaded with talent.

That means there will be no let-up from Hines at this weekend’s 30th annual AAA Texas NHRA FallNationals at the Texas Motorplex, where the longtime Pro Stock Motorcycle standout hopes to take another step towards his fifth series crown – and win his second straight race in Dallas – on his Screamin’ Eagle Vance & Hines Harley-Davidson.

“It can go away just as fast as it happens,” said Hines, who currently holds an 89-point lead over teammate and second-place Eddie Krawiec. “You’re getting 20 points per round, so if you go out in the second round it just opens the door for someone. We’re trying to be consistent on Sunday and we’ve really worked on that throughout the year. Now we’re running consistent from lap-to-lap. We’ve been putting in a lot of time figuring things out.”

Tony Schumacher (Top Fuel), Courtney Force (Funny Car) and Dave Connolly (Pro Stock) joined Hines as winners of the tradition-rich event located just south of metro Dallas one year ago. It marks the fourth of six playoffs races in the Mello Yello Countdown to the Championship, kicking off what surely will be a memorable second half of the NHRA’s playoffs. The race will be televised by ESPN2.

Hines has already put together a strong start to open the Countdown, winning two of the first three events, including the most recent at super-fast Maple Grove Raceway. It has put him in control of his own destiny and to take ownership of a possible fifth world championship ring, but Hines wants to ensure that things continue to move forward.

The two Countdown wins pushed his season total to three, but Hines is just as focused on correcting the things that led to a second-round loss in St. Louis at the second playoff loss.

“We had a little stumble in St. Louis and I could have done a better job of reacting on the starting line, and I’m really working to get those reaction times down,” said Hines, who has 41 career victories. “But I feel like things have gone pretty well. We’re making good power and good mile per hour, and we’ve made up a pretty good margin in three races. We were running OK before the Countdown and we’re running well now. Everything has lined up really well. We have a good motorcycle right now.”

The consistency has improved significantly during the postseason after a regular season where Hines and his team, led by crew chief Matt Hines, were not afraid to push the envelope and try new things.

There were up and down moments, but now that the team is in the middle of the Countdown playoffs they are utilizing what worked during all of the vast experimentation.

“We looked at what was working and pieced it all together, and it’s been running strong since,” Hines said. “We just have to keep it rolling. It’s tough to bring that performance week in and week out but we’ll go out and try to do the best we can. We’ll be prepared for Sunday and hopefully we can continue this string.”

Looking to stop that momentum will be a host of challengers, including Krawiec, who was the points leader heading into the Countdown on the strength of three wins. Other Pro Stock Motorcycle stars include Hector Arana Jr., who won in St. Louis and is 101 points behind Hines, alligator farmer Jerry Savoie, two-time world champ Matt Smith, 2009 champ Hector Arana, two-time season winner Karen Stoffer, Jim Underdahl, Chip Ellis and Scotty Pollacheck.

But with a week off before heading to the Texas Motorplex, Hines and his team will certainly be ready. The goal will be to pick up his second career win in Dallas, extend the points lead and continue to perform well in pressure situations.

“The goal for Dallas is to get a cowboy hat,” said Hines, referencing the ultra-popular Texas Motorplex winner’s circle tradition. “I would like to get another one. I ran well there last year and I know the bikes like the track. It’s just a matter of bringing the right tune-up. I just enjoy racing in general and it’s nice hitting a different part of the country this weekend. We’re going to go to the track and just let the chips fall where they may.”

Erica Enders will look to get a step closer to a second straight world title in Dallas in Pro Stock, but will have to deal with the likes of four-time world champion Greg Anderson, who sits 72 points back in second, Allen Johnson, rookie Drew Skillman, who picked up his first career Pro Stock win in St. Louis, Larry Morgan, Chris McGaha, who won the most recent race to move into third and 104 points behind Enders, Vincent Nobile, Jason Line, Shane Gray and Jonathan Gray.

Drivers in the NHRA Lucas Oil Drag Racing Series also will be racing hard in their quest to become winners of the thrilling event during the weekend.

Mello Yello Drag Racing Series qualifying begins Friday, Oct. 16, with sessions at 2:45 and 5:45 p.m. The final two qualifying sessions will take place Saturday, Oct. 17, at 12:45 and 3:45 p.m. Final eliminations are scheduled for 11 a.m. on Sunday, Oct. 18.
To purchase general-admission or reserved seats, call the Texas Motorplex at (800) 668-6775 or visit www.texasmotorplex.com. For more information about the NHRA visit www.NHRA.com.