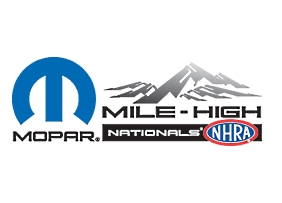 Larry Dixon raced to the qualifying lead in Top Fuel Friday at the Mopar Mile-High NHRA Nationals at Bandimere Speedway.

Dixon recorded a track record 3.791-second pass at 326.63 mph in his C&J Energy Services dragster to earn the provisional lead. Dixon, who has been runner-up five times this season, has two career wins at Bandimere and is two sessions away from earning his 52nd career No. 1 qualifier.

“The car’s been running really well lately, and we actually ran well here last year and used a lot of that data,” said Dixon, a three-time Top Fuel world champ. “We made a good run the first run, and that allowed us to stand on the gas a little tonight to see if it would stick, and it just barely did. I’m really happy.”

Brittany Force, the runner-up in Top Fuel at this event last season, qualified second with a 3.802 at a track record 326.95 in her Monster Energy dragster. Steve Torrence powered his Capco Racing/Torrence Motorsports dragster to the provisional No. 3 spot with a 3.822 at 322.88. Doug Kalitta and eight-time and defending world champ Tony Schumacher sit fourth and fifth, respectively, following the first two sessions.

John Force, a 16-time world champ, powered his PEAK Antifreeze Chevy Camaro SS to a track record 4.015 at 318.09 to earn the qualifying lead in Funny Car. He leads the category with six wins at the track located just west of Denver. Force has two wins this season and is searching for his second top qualifying effort of the year.

“We have good luck up here on the mountain, and we know how to make power, so we’ve done really well here,” said Force, who reached the final at this race last season. “It makes you feel good. I’m really excited. Dead tired, beat up, got here but good to be back on this mountain. It was a great show for the fans, and I love to hear them cheer. I couldn’t have had a better night.”

Tim Wilkerson qualified in the provisional second position with a 4.026 at 317.27 in his Levi, Ray & Shoup Ford Shelby Mustang. Jack Beckman, the 2012 world champ and two-time Denver winner, is currently in the No. 3 spot with a 4.035 at 313.73 in his Infinite Hero Foundation Dodge Charger R/T. Recent Chicago winner Tommy Johnson Jr. is fourth, and 2009 world champ and defending event winner Robert Hight is fifth with two sessions remaining.

Allen Johnson, the 2012 Pro Stock world champ, took the provisional No. 1 spot in Pro Stock with a track record 6.877 at 200.29 in his Magneti Marelli Dodge Dart. Johnson, who has six wins at the facility, has won this event for three consecutive years. He has 36 career No. 1 qualifiers and is looking for his first of the season.

“We knew he had three cars that were really fast and had to make perfect runs,” said Johnson, who won the most recent event in Chicago. “That last run was a perfect run to half-track. The car got out of the groove and was almost spinning but was still able to pull it off. This Magneti Marelli team digs down and gets it done.”

Larry Morgan, the Charlotte winner, sits second with a 6.878 at 200.20 in his FireAde Chevy Camaro and is followed by defending world champ Erica Enders in third with a 6.882 at 200.65 in her Elite Motorsports Chevy Camaro. Jonathan Gray is currently qualified fourth while new track speed record holder Shane Gray sits fifth.

In Pro Stock Motorcycle, current points leader Krawiec grabbed the qualifying lead with a track record 7.169 at 186.10 on his Screamin’ Eagle Vance & Hines Harley-Davidson. Krawiec, a three-time world champion, is two sessions away from his 24th career No. 1 qualifier.

“All in all, I think I made a really, very good run in the first session,” said Krawiec, a two-time winner of this event. “In the second session, we were probably a little aggressive with the track. I rattled the tires pretty hard and low. I have a great motorcycle, and I’m excited to go into eliminations and the following days here. It should be good.”

Qualifying for the Mopar Mile-High NHRA Nationals resumes Saturday at 4 p.m. with the final two sessions to set the fields for Sunday’s 11 a.m. eliminations.