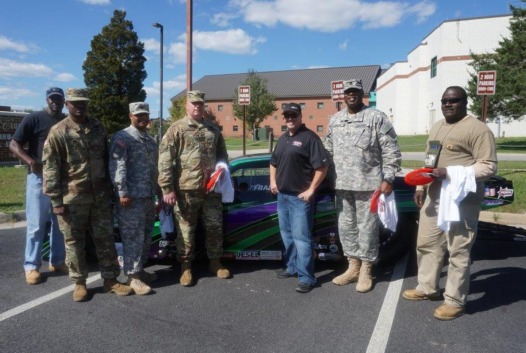 PITTSBORO, N.C. (October 16, 2015): The Professional Drag Racers Association (PDRA) is expressing its appreciation for the military by extending free tickets to any military personnel (retired or active duty) who present their military ID at the upcoming World Finals at Virginia Motorsports Park in Petersburg, Virginia, October 22-24. To personally express this gratitude to the military, one of the series standouts took time out of his competition schedule to visit the service men and women stationed at Fort Lee.

Virginia native Tommy Franklin is in the thick of the championship hunt for one of the PDRA’s toughest classes for the second year in a row. His eye-catching ‘69 Camaro has twice reset the Pro Nitrous elapsed time record. Though the Camaro wasn’t topping its usual speeds of over 200 MPH, it turned heads sitting perfectly still at the recent display event at the Fort Lee military base in Fort Lee, Virginia. For Franklin and the PDRA, this was the perfect opportunity to give back.

“It was nice to be able to be there and give back to our troops,” told Franklin. “Being able to shake hands and thank them personally, face-to-face meant the world to me. Knowing they will be in the stands makes us want to put on a good show that much more.”

For Franklin and his team, visiting the base hit close to home. “My main crew guy, Chris, went on three deployments,” Franklin added. “He suffered injuries from it that required shoulder and wrist surgeries. It

was cool for him to be able to go down there. He was very interested in being able to go and share with these guys. He knows what it’s like to be away from home and not always get contact with the outer world.”

Franklin personally handed out tickets to attend the upcoming World Finals, although anyone presenting their military ID will get in for free. As a further thanks from the PDRA, Franklin and his team gifted the military with PDRA apparel during the display.

The Brian Olson Memorial World Finals presented by Mel Bush Motorsports beings with a day of testing on Thursday, October 22 at Virginia Motorsports Park. General admission tickets for Thursday are just $10. A full day of qualifying for all professional and sportsman competitors begins on Friday, ending with the Tulsa County Heat Wave Jet Car. A final round of qualifying and eliminations will be held on Saturday. General admission tickets are $30. A full event schedule and discounted tickets are available at www.pdra660.com.