Tim Wilkerson watched Alexis DeJoria run the first three in Texas Motorplex history, with a 3.969 one pair ahead of him in Q2. He then quickly took the record away from her with a 3.968 in the right lane, but his reign with the record lasted exactly one more pair, as Matt Hagan and Robert Hight each bettered the mark when they ran as the next two cars on the track. And that was just the beginning, as four more drivers ran quicker than Wilk’s 3.96 and he ended the night in the No. 7 spot in the field. In all there were eight cars in the the threes and four in the 4.0s, while Cruz Pedregon’s 4.101 was not good enough to crack the top 12 on Friday.
After some lengthy clean-ups during the Top Alcohol classes, the second Pro session was run about an hour late, giving the sun a chance to set while making the Motorplex track better by the second. Wilk ran a 4.058 in Q1, on a much hotter track, and that run was slowed by a broken blower belt just shy of the finish line, as Wilk’s speed of only 292.20 mph would attest. His speed in Q2 was a much healthier 320.13 mph. 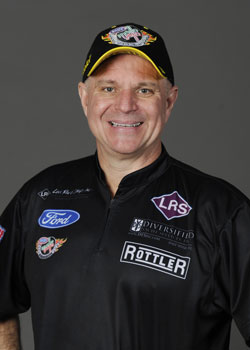 “We were aiming for a 4.03 on the first one, but the rubber band broke at about 900 feet,” Wilk said. “Then the alcohol cars started messing up and we waited, and waited, and waited. I don’t like to wait, but the good news was the track was cooling off fast by then and it gave us a chance to run in conditions we weren’t supposed to run in. We have cooperative car here, and she did what we wanted her to do, almost right on the money.

“I know it’s tough on the fans when a few cars oil the track and we’re down for a while, but at least the payback was a Funny Car session for the ages. There had never been a three here, and we ran eight tonight. To tell you the truth, I’m a little surprised we didn’t run a few more in the class. Some really good cars were in the 4.0s. Tomorrow is supposed to be cooler, but if the sun is out we won’t have a free-for-all like tonight, although this whole class has surprised me enough times this year that maybe I shouldn’t state that for a fact.”
Team Wilkerson Racing
NHRA Nitro Funny Car
http://www.timwilkerson.com