POMONA, Calif. (Nov. 13) – Advance Auto Parts driver Courtney Force finished the 2017 season with a career-best third-place points finish, racing to the semifinals of the Auto Club NHRA Nationals on Sunday at Auto Club Raceway at Pomona – her fourth semifinal in six Countdown to the Championship races.

Force, of nearby Yorba Linda, Calif., took her Chevrolet Camaro SS Funny Car to the semis Sunday, falling just short of a second consecutive final-round appearance at Pomona (she was runner-up in the NHRA Winternationals in February).

She ran into teammate Robert Hight – who won his second Funny Car title earlier in the day – in the semis, and spun her tires, leaving Hight to win and finish with his seventh finals appearance of the season.

“It was a great weekend, very exciting. We teamed with Taylor Swift and Big Machine Records, and to have Big Machine pull this together – with Scott and Mark Borchetta – and pull off a Taylor Swift design, on my Funny Car, is pretty amazing,” Force said. “I was honored to drive it, and help her promote her new album, reputation. Really thrilled about it.

“It was an awesome weekend for our Advance Auto Parts team and to go all the way to the semifinals with a great team and a great car is a great way to end the season on a high note. Finishing third, I’m really proud of my guys with the consistency we’ve had all season long, and really looking forward to 2018.” 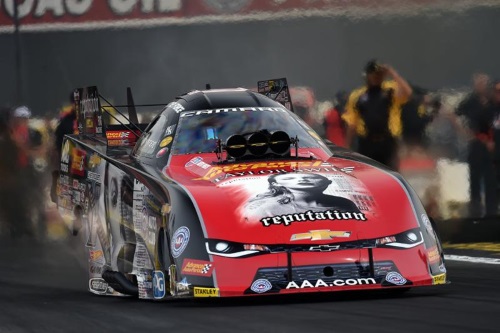 Force, the No. 3 qualifier, won her first-round matchup against Jeff Diehl despite late-race problems. She got away first with a reaction time of .071 seconds and had a flawless pass until she had to pedal the car late. However, Diehl struck the tires at the start and Force pulled away, clocking in at 4.157 seconds at 228.23 mph.

With the championship decided after the first round, Force met Del Worsham in the second round, seeking to move up to second in the standings. But the race didn’t happen – Worsham’s car was pushed off the starting line before the green light, allowing Force a solo and an attempt to gain lane choice. Her 3.842-second pass at 331.12 mph was nine thousandths of a second quicker than Hight’s time, and her team chose the left side.

Force got the jump at the light – a .075-second reaction time to Hight’s .095 – and led until 330 feet, when she slowed. She tried to pedal, but Hight drove around her. He finished the race, then his car suffered an explosion. He slid across the track, made contact with the wall and slid into the sand trap. Hight quickly exited his car and entered the final round in a backup – and third body of the weekend.

It marked a banner day for the John Force Racing team. Shortly after Hight took his second title and pushed JFR’s total to 19, Courtney Force’s sister, Brittany Force, garnered the team’s 20th crown and first in Top Fuel, taking her Monster Energy dragster to the championship.

“On top of it all, I’m really excited that we came home with two championships at John Force Racing, and that’s what it’s all about,” Force said. “I’m really proud of my teammates – Robert Hight and my sister Brittany Force – this is huge, and for my sister to win the race, along with the championship trophy, is pretty amazing. I’m really proud of both of them, and looking forward to 2018.”

Force and her competitors will be honored for their achievements Monday night at the 2017 NHRA Mello Yello Drag Racing Series Awards Ceremony in Los Angeles. 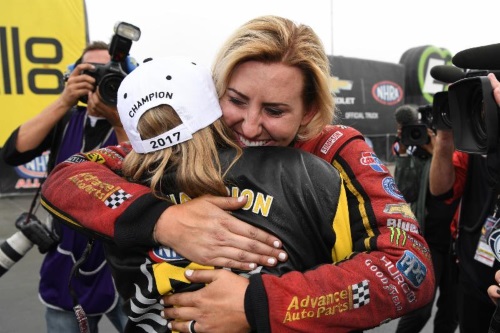