Force, driving the PEAK Coolant & Motor Oil Chevrolet Camaro SS, also made history by racing in the team’s 4,000th Funny Car elimination round, beating J.R. Todd in the opening round before falling in the quarterfinals. He finished seventh in the Funny Car standings, ending the year with a victory in the NHRA Gatornationals and 23 elimination-round victories. It also marked the 30th season he won at least one race.

“Oh man, I haven’t figured this out yet,” John Force said. “But just proud to see it come together. I expected it from Robert, and I saw Brittany’s lights every round, right there with the hitters. She’s still numb; she doesn’t know what happened.

“It was like a movie; you couldn’t have written it any better. Sometimes luck’s a big part, but as a team owner, I’ve been really proud how the people have stayed together and fought together and worked together. We put the band back together, that’s what I told Jim Campbell from Chevrolet. Me and Robert work every day, and we said we’d turn it around.” 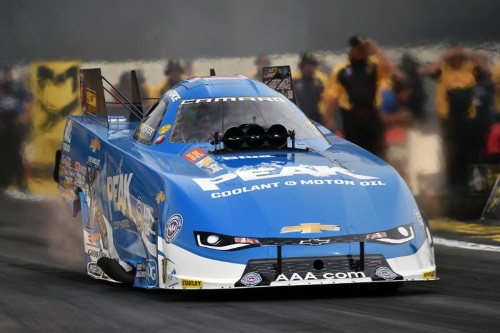 Force, the No. 8 qualifier, raced Todd close in the first round. Force led the entire way, using a .055-second reaction time to jump ahead and stay there, but he slowed late, allowing Todd – who smoked the tires earlier in the run – to catch up. But Force had enough to win, posting a 4.178-second pass at 232.39 mph.

That set the stage against former champion Jack Beckman. Force ran 3.932 seconds at 310.98 mph, but Beckman got the victory.

The day, though, belonged to his teammates, and Force acknowledged that their accolades as a huge boost to the organization. Force won the team’s last driving championship, in 2013. Hight’s title was his second, and first since 2009.

“To see him win it for Auto Club – they deserved it,” Force said. “They are a great partner. Courtney performed. Taylor Swift and Big Machine Records – how could it get any better?”

“For Brittany, as a father, to watch her go through the gut aches, I was living it with her and so was her mom, and that red light at Las Vegas really hurt her, but I told her, you have to find yourself. And I can’t take any credit. She had a great coach in Alan Johnson, who took a girl and did what (three-time Top Fuel champion) Shirley Muldowney did 35 years ago. He amazes me. They delivered for Monster a championship, and then went on and won the race.”

Force and his competitors will be honored for their achievements Monday night at the 2017 NHRA Mello Yello Drag Racing Series Awards Ceremony in Los Angeles. 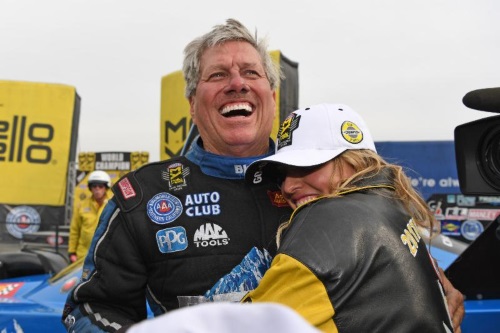 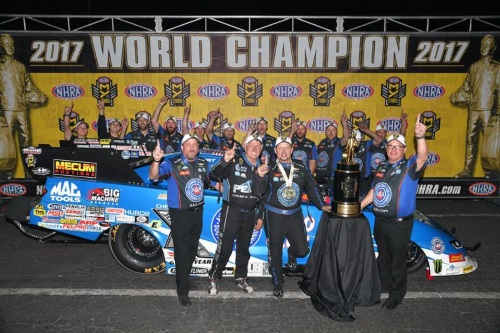