“After a long winter it’s pretty cool to get out to the Saint Louis Auto Show and get back with the fans and talk a little NHRA drag racing. It will probably be more special this year coming in their being the champion. In years past, the fans, every time I’ve gone to this auto show, they say things like, ‘I hope JFR gets their act together this year’ or ‘I hope you guys get back into your winning ways.’ Now I can go in there with a little confidence because we won two championships. So, it’s going to be a lot of fun.”

The AAA Missouri booth will be stationed next to the display from Gateway Motorsports Park, which hosts the AAA Insurance NHRA Midwest Nationals on Sept. 21-23 this year.

“With the Gateway Motorsports Park booth adjacent to AAA all the race fans can come over and see what AAA has to offer, get an autograph from me and also go check out everything from the race track. I know they’re going to be giving away tickets to the races in their booth. It’s always exciting. Can’t wait. Chevrolet also has a big presence at the event so it’s always cool to walk around and see all the new cars that are out, especially the new Chevys.”

The Saint Louis Auto Show, held at the America’s Center and Edward Jones Dome, features more than 500 new cars and trucks from more than 25 manufacturers attracting motorsports fans and car enthusiasts from all over to make it the largest auto show in the St. Louis area.

“It’s a lot of fun to meet with the fans. It’s the same fans that come to the races. I remember a couple years back before Curtis (Francois) and his group bought Gateway and brought it back to life, those fans were so bummed that we didn’t have the AAA Midwest Nationals. Once that came back it gave fans something to talk about. In January they’re already looking forward to a race that’s in September. Can’t wait to share in the excitement with them and AAA.” 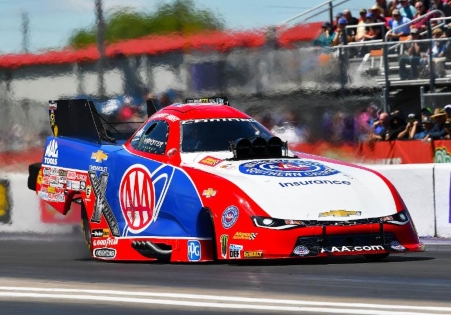