TULSA, Okla. (Jan. 10, 2017) – Rico Abreu had a perfect night, sweeping all three of his races culminating with a victory in the 25-lap Hard Rock Hotel & Casinso A Main in the 32nd annual Lucas Oil Chili Bowl Nationals at the Tulsa Expo Raceway, Wednesday night. Toyota-powered cars have won each of the first two nights’ preliminary features, as well as Tuesday’s Race of Champions.

Abreu opened his night by charging from sixth to first to win his heat race and then matched that feat in the evening’s qualifying race to earn a front-row starting position for the A Main.

In the feature, he ran second in the early going before eventually moving past pole-sitter Tyler Thomas on lap eight. The two would trade the point position through the midway point before Abreu would eventually take the lead for good on lap 16. Thomas would make numerous attempts to re-take the lead, but Abreu fought off the challenges on the way to earning his third Chili Bowl preliminary night feature win. 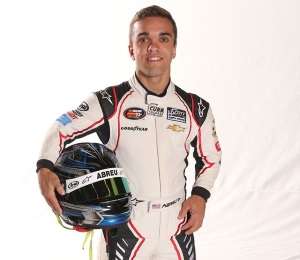 “My car was really good,” said Abreu, who will be looking for his third Chili Bowl title in the past four years on Saturday. “Keith Kunz and Pete Willoughby do a great job. Speedway gave us a phenomenal engine and the support that Toyota has provided the team throughout the years is second to none. It’s great to be fortunate enough to drive such fast racecars.

“We’ve put ourselves in a good position for Saturday, but it’s 55 laps, so it’s going to be a long race. The field is so deep that I feel everyone in the A Main is going to have a shot at winning. You have to be smart. You don’t want to put it all on the line in the first 30 laps. You have to have to work forward as the night goes on. Patience is everything in this race.”

With the victory, Abreu advances to Saturday’s A Main feature event and is guaranteed to start no lower than fifth in his Keith Kunz Motorsports (KKM) Toyota.

For the second consecutive night, five Toyotas advanced to the A Main. Abreu’s KKM teammate Ryan Robinson finished sixth, with J.J. Yeley in eighth, Brady Bacon placed 13th and Chase Stockton finished 17th. Robinson and Yeley will open Saturday in the B Mains, while Bacon and Stockton each begin in the C Mains.

Landon Simon advanced to Wednesday’s B Main, while Tanner Berryhill’s day ended in the C Main.

This year’s Chili Bowl features more than 350 entries. Each is fighting for one of the 24 openings in Saturday night’s “A Main” feature event. Qualifying continues for the next two nights with 10 more Toyota-powered drivers, including defending champion Christopher Bell, expected to attempt to qualify on Thursday.