MOORESVILLE, N.C. (January 18, 2018) – The 2018 season of NHRA’s Mello Yello Drag Racing Series will mark quite a milestone for Greg Anderson, the four-time Pro Stock champion and driver of the red Summit Racing Chevrolet Camaro. Anderson, who has so far amassed 90 victories in 149 final rounds with KB Racing, will be competing in his 20th anniversary season as a driver – but there will be no celebration for the sixth-most winning driver in all of NHRA at one of his most favored racetracks, Old Bridge Township Raceway Park.

On January 17, it was announced by the facility’s owners that drag racing would cease at Englishtown’s Raceway Park, effective immediately.

“I’m shocked,” said Anderson, who won the last NHRA national event held in Englishtown, the 2017 Summernationals. “I’m still crying about this racetrack closing; I’m very sad about it. I might not shed a tear for any other racetrack on the circuit, but this one has been pretty special to me.” 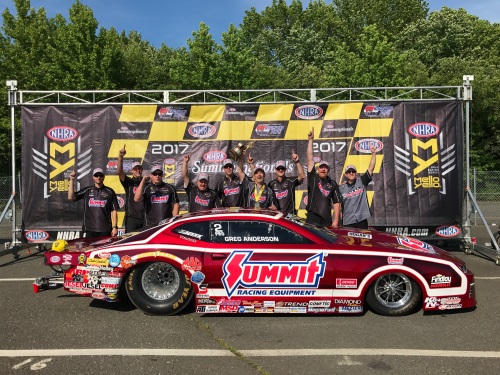 Anderson claimed a total of eight trophies in 10 final rounds at Raceway Park. His very first Englishtown win was scored in 2002, and he added victories in 2003, 2007-08, 2012, and each year since 2015. His eight wins there were the most for any driver in any professional category.

Aside from his own success and that of KB Racing teammate Jason Line at E-town, Anderson was crew chief for acclaimed Pro Stock driver Warren Johnson and was part of the team when Johnson’s son, Kurt, broke a major barrier. Old Bridge Township Raceway Park was the site of the very first six-second Pro Stock run that day in 1996 when KJ put a 6.988 on the scoreboard in qualifying.

“Running with the Johnsons then and being part of that was something I will never forget. That was a big barrier to break, and we did it there in Englishtown,” said Anderson, who blasted the national records himself in 2003 with a spectacular performance at Raceway Park that included the first 6.6-second pass in the history of the class and, ultimately, a 6.670 at 207.18 mph that was the best-ever in the category to that point.

In 2012, Anderson made history again as he scored the 100th victory for KB Racing, which was also the first for the Pro Stock class with the then-new Chevrolet Camaro SS body.

“It’s just been a great track for me for many years, and for KB Racing, but the memory that stands out the most is completely unrelated to drag racing; it’s where I first met my wife, Kim,” said Anderson. “That was where it all started. I was like, ‘Oh, who’s this?’ My story is that she chased me for many races after that, but I’m sure she doesn’t remember it like that. There were a lot of neat things about Englishtown for me, and it’s a sad day to see it go.”

For Team Summit’s Line, winning was just what he did at Englishtown for three consecutive seasons – from 2004 to 2006. His first Raceway Park victory came in his first full season of Pro Stock competition in 2004, but what may be his most memorable Englishtown moment occurred the year prior.

“When I first started working at KB Racing, we went to Englishtown and Greg set the record,” said Line, referring to teammate Anderson’s 6.670, 207.18 in 2003. “That was just a super cool moment and, really, a pretty special weekend.

“For me, winning there three years in a row, all on Father’s Day, was something else I won’t forget. Englishtown was always a fun place to go because it’s fast, and there are a lot of Pro Stock fans up there who are very enthusiastic. It was a shock to hear that we won’t be racing there, and certainly disappointing. We all loved going there, it’s a place with a lot of history. It’s a sad day, but we’re certainly grateful for all of the memories.” 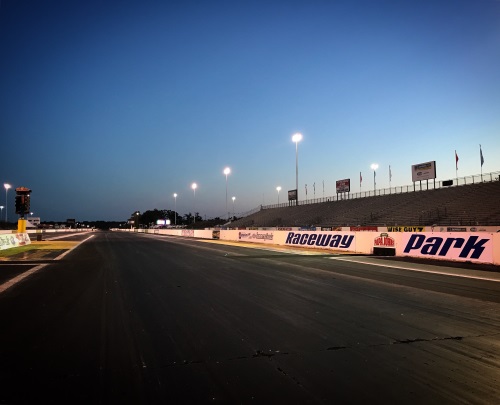