The special occasion featured a car show, autograph session, Q&A with all four drivers, museum tours and also the debut of the new web series chronicling the 2017 season. Additionally, food trucks were on site during the event. Throughout the evening fans wandered through the shop and museum, snapping photos from the four decades of racing dominance. 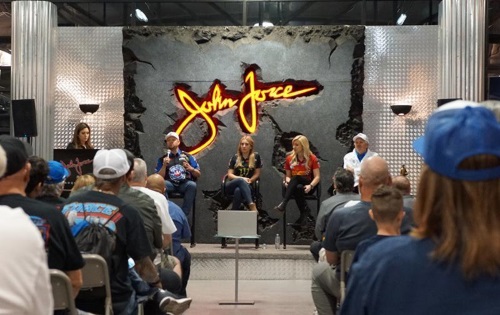 The highlight of the night was the Q&A session led by Ashley Force Hood, president of John Force Entertainment, which included all four drivers and was quickly taken over by the gregarious team leader John Force. During the 30-minute session topics ranged from racing to raising kids to Force’s newly earned honorary doctorate from University of Northwestern Ohio.

“We wanted to celebrate the success of last season and also get excited for this upcoming season. My dad took over the question and answer session and it got a little crazy. We are excited to debut the web series and also spend some time with our fans,” said Ashley Force Hood, the unofficial hostess of the event and also a two-time US Nationals winner in Funny Car.

PEAK Antifreeze and Motor Oil provided free cupcakes to celebrate Force’s doctorate to all the fans. The team will head to Auto Club Raceway at Pomona for the historic Winternationals which begin tomorrow with two qualifying sessions.