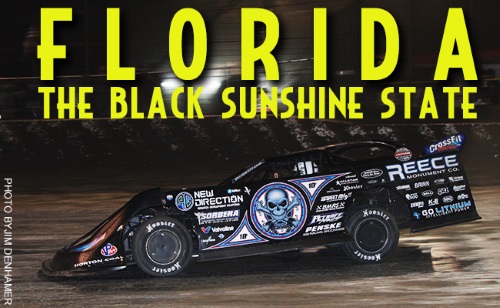 “We got this new car on Monday; first time we ran it,” said Bloomquist. “We were creeping up on it a little bit. We made a few mistakes. Just get down on it. Car got pretty dang good. This Andy Durham Engine ran super smooth… We got some good people with us and hopefully we put on a good season.”

Bloomquist, of Mooresville, TN, started on the pole for the 50-lap event but Marlar, who started on the outside, immediately jumped to the front. The Winfield Warrior quickly widened his lead but by lap 12 Bloomquist reeled him back in and secured the pass for the top spot just one lap later.

“I didn’t really know anything about what was going on behind me. I could move around quite a bit. I passed a lot of cars in the middle, some on the bottom, actually this car felt good everywhere. So, we don’t have much we need to mess with tomorrow. It’s just a car wash and go.”

While there was plenty of action behind Bloomquist, he was only ever seriously challenged for the top spot with two laps remaining. Chris Madden, of Gray Court, SC, charged for the lead after getting a run off of turns one and two. He caught up with Bloomquist on the high-side but as quickly as he caught up to him, he trickled back.

“We definitely had a great racecar right there especially at the end of the race,” said Madden. “[Bloomquist] got out about a half a straight away right there and we run him down and mounted a shot at going for the lead down there in [turns] one and two. We got behind [Kyle] Bronson down the back straightaway and it took air off the car. If it wasn’t for that, I think we’d be in first place.”

Dale McDowell finished on the podium for the second straight night after another great run towards the front from a mid-field start. Although his charge doesn’t match the night before (15th to first), McDowell was still satisfied with his finish.

“It worked out for us, I just got to get qualifying down,” said McDowell. “Man, we’re burying ourselves qualifying and it’s me, just wide open against that cushion. I haven’t got that figured out yet. So, we will work on it. We have another night to work on it and I’m just glad to be in the top three.”

The World of Outlaws Craftsman Late Model Series joins the final night of competition on Saturday at the 47th annual DIRTcar Nationals. Tickets for the event are available at the ticket gate or join us from the comfort of your home by watching every lap live on DIRTVision.com. 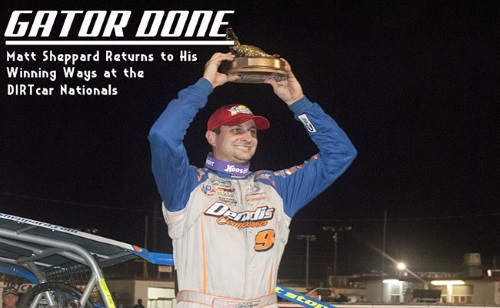 BARBERVILLE, FL – February 17, 2018 – Super Matt Sheppard started the third Super DIRTcar Series Big-Block Modified DIRTcar Nationals Feature in third but wasted no time positioning himself in pole-sitter Danny Johnson’s tire tracks. Johnson lead the field for the first 17 laps until he caught up to lapped traffic. Johnson attempted to make a pass on the high-side. Unfortunately for the no. 27j, he slid up and Sheppard made the best of the opportunity and set sail en route to his first victory of 2018 season.

Matt Sheppard described the pass: “I saw [Danny Johnson] go to the top. I was just hoping I could get in there and fill the gap before he could get back to the bottom. He left a little bit of a gap going into one and when he slid up I said I gotta get through here. I just nailed that thing to the guardrail for the rest of the race; It performed flawlessly.”

Coming off a 40-win season, it only took three races in 2018 for Sheppard to park the 9s in Victory Lane. “I put my guys through hell coming down here. We had a bunch of stuff we wanted to give a try. We kind of abandoned ship and went back to the old stuff. This car hasn’t seen a race track since Charlotte at World Finals. It was pretty good in Charlotte and it was pretty good tonight.”

Sheppard was excited about the victory and gave credit to his fellow Gator wranglers on their wins in Thursday’s doubleheader. “It [a win at Volusia Speedway Park] means a lot. You know you travel all the way down here. It’s a long trip and you know we all do it for this Gator. Congrats on Tyler [Siri] and Timmy [McCreadie] for getting their Gators last night. This is what it’s all about.”

Danny Johnson: “Hats off to my crew for doing a fantastic job today getting the car ready. We probably should have won the race but didn’t. Just happy to be here with a podium finish. I tried passing the cars on top but that was a total mistake. It just didn’t work. He [Matt Sheppard] got underneath me and he was gone. It is what it is. It’s all good. We’ve got more to come.”

When the field first took the green flag, Max McLaughlin split Justin Haers and Matt Sheppard through the middle in a three-wide pass. Unfortunately for the Young Gun McLaughlin, J.R. Hefner suffered a flat tire and brought out the caution resulting in a complete restart.

“If we wouldn’t have had that caution after that first lap we were already in second. Who knows what would have happened after that. We picked the wrong tire tonight. We went soft and had to really take care of it. I’m pretty happy with third. T-Mac [Tim McCreadie] was all over me but I just tried to hit my marks every lap, stay on the bottom, and race my own race.

Saturday, February 17th is the 12th and final night of the Volusia Speedway Park’s 2018 DIRTcar Nationals. The Big-Block Modifieds of the Super DIRTcar Series and the World of Outlaws Craftsman® Late Models will close out a fabulous 12 days of on-track festivities. If you can’t make it to Florida be sure to tune in for live coverage on www.dirtvision.com.

Original article can be found on the DIRTcar web site