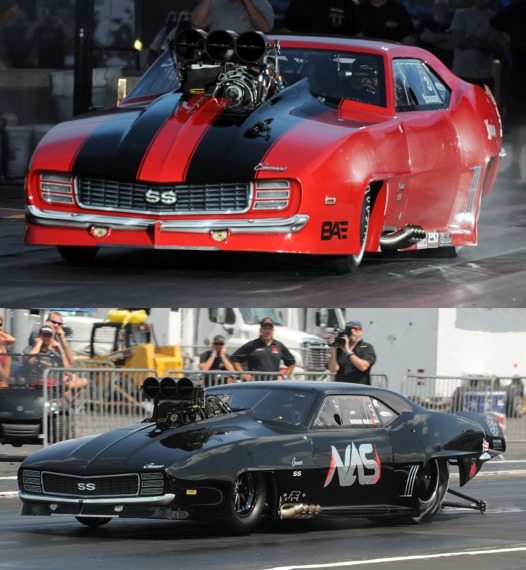 PITTSBORO, N.C. (October 21, 2015): As home to the quickest and fastest machines of the PDRA, NAS Racing Pro Extreme is always a must-watch class and 2015 was no different. The competition continually pushed the limits, causing fans to both hold their breath in excitement and shout loud the thrill of victory. Teams made incredible sacrifices and gains all throughout the season. NAS Racing Team member Mustafa Buhumaid led the points early after winning the first event and going to the finals again at the second stop on the tour. A mid-season setback for Buhumaid then allowed past champion Jason Scruggs to take over the points lead. However, the team from Dubai wasn’t done yet, and Buhumaid’s teammate Badir Ahli began charging on Scruggs, going to three finals in four races.

Going into the final event of the PDRA’s sophomore season, the points battle is now between Scruggs and Ahli. With five wins this season, Scruggs has an impressive lead, but if anyone is up to the challenge of taking him out, it’s NAS Racing.

“The Ruler of Dubai once said that people of Dubai should always work hard to be number one and we are living up to his vision,” stated Ahli. “NAS Racing team is always highly motivated and strives to perform at its very best and it did pay off with two wins this year. We had our ups and downs during the season as this is the nature of this very sport. We worked hard as a team to overcome every obstacle.”

While Scruggs has won championships in the past and even played a part in Bubba Stanton’s championship in 2014, he confesses this is his first year with this level of success. “I’ve never had a year where we’ve won so many races. We’re definitely having a great year. At the very first race in Ennis, Texas we went there with abrand new car that had never been down the race track. We qualified third with a 3.58, but we were a little bit lost with the car and it bit us first round. The car wasn’t going perfectly straight. Then we went to Rockingham, our second race of the year, and we ran really good. We qualified number one, but then we broke a blower belt in the burnout box in first round. So we never even got to run that race. Then after that we won Louisiana and we’ve been on a streak ever since. We’ve actually won five out of the last six races. We debuted this Jerry Bickel car and it’s done a great job for us this year. I really can’t complain.

“I thank Jerry Bickel for a great car this year, Hoosier Race Tires for all they do for us, Flatout Gaskets, Snyder Lenco Drive, BAE, MBM Wheelie Bar – they’ve been good all year. They’ve helped us on the starting line all year long and have been great to work with. Of course, I also thank scruggsfarm.com and I certainly want to thank my dad, Mitchell Scruggs and Ricky, Rhett, Dennis and Wesley on our crew.”

Even with five wins this season, the PX Championship isn’t quite locked up for Scruggs. He must qualify and win first round at the World Finals this weekend. “I know everybody says this but we’re really not counting points,” Scruggs added. “We’re just going there to try to qualify, first, and win the race, second. It’s never over ‘til it’s over. That’s the way I look at it. Yeah, we want to win the championship. That’s what we start the year to do every year, but at the end of the day, we go into each race wanting to win the race, too. The air’s going to be good. We just want to run fast and maybe even set a record ourselves. That would really put an exclamation point on a great year.

“It’s tough out there,” he continued. “The NAS Racing Team has been awesome all year long. Mustafa came out and led the points early. He had a little setback when he brushed the wall and switched cars mid year. And Badir, he just goes rounds at every race and he’s been battling tooth and nail with me all year. I got a lot of respect for those guys and everybody else in the class. Todd Tutterow has run real well with his first year back in Pro Extreme. Anybody out there could take your head off first round. Every round is just so competitive. There’s no easy rounds anymore. That’s what makes it most gratifying – the level of competition.”

Always up to the challenge, Ahli won’t let Scruggs go without a fight. With NAS Racing sponsoring both his team and the class, winning the PX Championship would be a double celebration.

“Plan is simple,” told Ahli. “We are here to race and we will give it our best shot as always. As sponsor and participant of PX class we thank PDRA for doing its best. There were certain issues which we hope PDRA will overcome by next year.”

“Sometimes you start taking [championships] for granted when you have a lot of success,” added Scruggs. “It’s been five or six years since I’ve won one now. I’m not taking them for granted anymore. Every round is gratifying.”

Each round of the PDRA World Finals will bring elation for some and heartbreak for others as the 2015 championships are decided. Tune in to the PDRA Live Feed and watch all the action as it happens. Discount tickets available at www.pdra660.com.