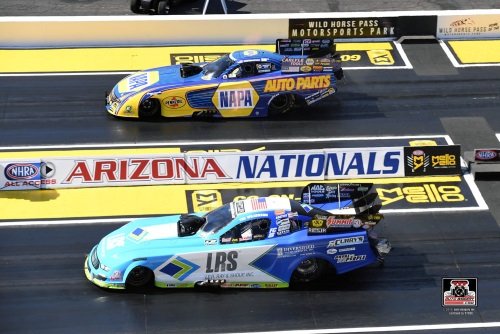 PHOENIX (February 25, 2018) – Tim Wilkerson and his Levi, Ray and Shoup Ford Shelby Mustang nitro Funny Car began to draw together in agreement at the 34th annual NHRA Arizona Nationals. Although it didn’t show in final results, the Springfield, Illinois-native gained ground and plans to put the information acquired to good use as the 2018 season of NHRA’s Mello Yello Drag Racing Series kicks into gear.

Wilkerson qualified in the No. 15 spot after determining that the culprit of his Funny Car’s unruly behavior was a bent chassis. A quick change of cars and Wilk was on his way to a first-round meeting with Ron Capps. Wilk left the starting line first with a .074-second reaction time to his opponent’s .090, but soon it was Capps surging ahead for a 3.908-second, 325.30 mph win over a 4.091, 256.89.

“I really thought we had a good chance of doing something good today. But the car left the starting line, hit the bumps about 80-100 feet out there, and it went bump, bump, bump and put a hole out,” said Wilkerson, explaining the reason for the quieting of one cylinder. “It moved me over, and I was steering it back, but I could see Capps driving away. We still went 4.09, and there were only two other cars in the whole session that would have beat us.

“I was optimistic going into that round, but I’m happy still. I’ll get home and get my wits about me, and then we’ll see what I can figure out. If we can get our new car in time and I feel good about it, we might run it in Gainesville. I’m not set on my views quite yet.”