As a snapshot of the tour’s diversity, the Bill France 4 Crown provides a link to ARCA’s roots by featuring a diverse combination of tracks in any given season. This year’s four-race package spreads out from late April through early September, beginning with the 2.66-mile Talladega Superspeedway April 27. The half-mile Madison Int’l Speedway short track follows June 15 before ARCA heads to the 2.5-mile Pocono Raceway triangle July 27. The Bill France 4 Crown will conclude at the DuQuoin State Fairgrounds mile dirt Labor Day Monday, Sept. 3.

“Bill France, Sr. is an institution in motorsports, especially here at Talladega Superspeedway,” said Grant Lynch, Chairman of Talladega Superspeedway. “After all, Mr. France created this iconic venue in 1969, and one of the events held that initial year was with the ARCA Racing Series, the race then called the Vulcan 500. We are extremely proud to be a part of this year’s Bill France 4 Crown program, a grand salute to Bill France, Sr.”

Talladega and Pocono are past participants in the Bill France 4 Crown. 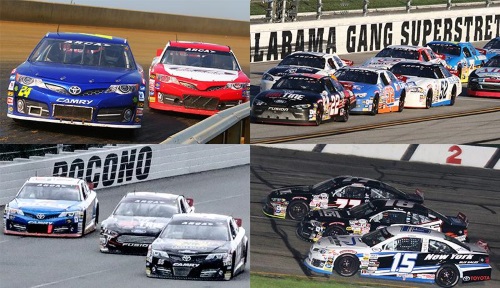 “I always loved the Bill France 4 Crown and I’m honored to have Pocono as part of it,” said Pocono Raceway President Nick Igdalsky. “I think it really shows who is the most well-rounded driver in the series.”

ARCA President Ron Drager added, “It’s especially appropriate that Talladega and Pocono are part of the 4 Crown. Bill France Sr. brought Talladega Superspeedway from a concept to reality in the late 1960s, and ARCA raced there in the inaugural season of 1969. His vision included the eventual construction of the International Motorsports Hall of Fame, where the ARCA Hall of Champions recognizes each series champion from 1953 to present. He was a close personal friend of Pocono Raceway founder Dr. Joseph Mattioli and provided support and encouragement as “Doc” established Pocono as a major motorsports facility in the northeast. As with Talladega, ARCA’s presence at Pocono goes back to its beginnings, with an ARCA race on the Pocono ¾ mile in the track’s first year of existence in 1969.”

The 2018 season marks the first time that Madison Int’l Speedway has been part of the 4 Crown.

“We are honored to be a part of the 2018 Bill France 4 Crown,” said Madison Promoter Gregg McKarns. “This is the first year for Madison, and to be mentioned in the same category with Talladega, Pocono and DuQuoin is huge for Madison Int’l Speedway.”

ARCA’s annual dirt races are promoted by Track Enterprises. The Bill France 4 Crown shifts back and forth between Springfield and DuQuoin.

“Track Enterprises is proud to be a part of the Bill France 4 Crown again this coming year at our one mile dirt oval at the DuQuoin State Fairgrounds,” said Track Enterprises President Bob Sargent. “We very much respect the diversity of ARCA, and we look forward to crowning the champion for 2018 at DuQuoin.”

Bill France 4 Crown points are distributed based on race finishing positions only.

Each season the Bill France 4 Crown champion is honored on stage at the year-end awards banquet.