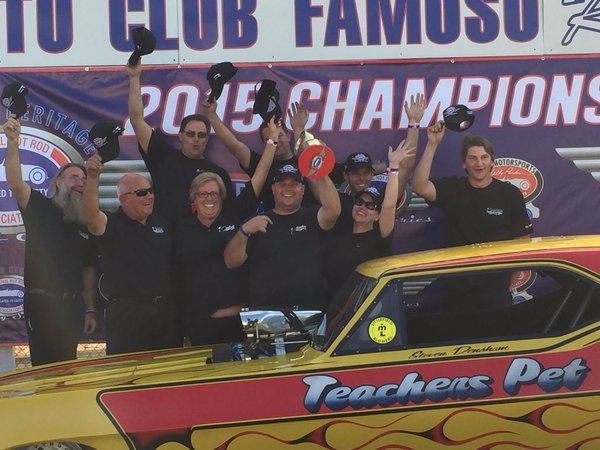 In the NHRA Hot Rod Heritage Racing Series Funny Car points championship, Steven Densham was able to outlast the competition to claim his first crown. The second-generation racer secured the title during the course of competition on Sunday.

“It’s an amazing feeling and we have had a pretty good year all year long,” Densham said. “We ended winning the championship and I’m super excited it happened.”

“He has done very well throughout his career and you can’t take anything away from him,” Steven said of his father who has won eight NHRA national events in his career. “How hard he has worked and well he has done with the very little money he had with the big car. It is always great to have my dad as a big part of that. He is the one that makes the car run so well.”

In Funny Car, it was Ryan Hodgson winning the event from the lead of the field as he was the No. 1 qualifier coming into eliminations. In the finals, he defeated Jason Rupert with a pass of 5.722 seconds at 255.63 mph to the trialing 5.817 at 249.21 run posted by Rupert. Hodgson also had the low E.T. and top speed of the meet.

“You go out there know it is running so good and you just get in your groove and keep on, keeping on and race,” Hodgson said. “My team is everything and I’m just the smallest part of this thing and I get it down the track. These guys bend over backwards. Every time we race, these guys are real important to everything.”

In Top Fuel, Bill Dunlap of Capitola, Calif., raced to the victory when he bested Denver Schultz. In the finals, Dunlap powered to a winning run of 5.695 at 255.58 to the losing run 5.838 at 255.58. Dunlap defeated Brendan Murray, Dave Hirata, and Rick White top advance to the finals. This is the second win of the season for Dunlap at a Hot Rod Reunion event as he won in Bowling Green.

“I was lucky enough to win the inaugural event here in ’92,” Dunlap said. “It is the crew that gets me there. I’m just the lucky guy who gets to push the pedals. The crew that we put together for this race is amazing. I have to blame it all on the crew.”