GAINESVILLE, Fla. – It hasn’t been an ideal start for legendary Funny Car driver John Force, but the 16-time world champion is only focused on what is ahead at this weekend’s AMALIE Motor Oil NHRA Gatornationals at Gainesville Raceway.

Following a massive engine explosion in Pomona and a crash at the most recent race in Phoenix, Force is anxious to return to action at Gainesville in his 10,000-horsepower PEAK Chevrolet Camaro SS. Gainesville Raceway is the site of Force’s last victory and home to eight career Force wins, the most of any Funny Car driver, which means it could provide the backdrop for another classic performance from the 148-time winner.

“I am ready to get back to the race track,” said Force, who is 11th in points. “We have had some struggles at the first two races but we are figuring it out. My team has been going over my PEAK Chevrolet Funny Car and we’ll be ready. The good news is Robert (Hight) stayed and tested after the last race and Courtney won in Phoenix. We all share information and I love racing at the Gatornationals. I am ready to get back to the fans. It was good to have some time off but now the season is really going to get started.”

Tony Schumacher (Top Fuel), Force (Funny Car), Shane Gray (Pro Stock) and Eddie Krawiec (Pro Stock Motorcycle) were last year’s winners of the NHRA Mello Yello Drag Racing Series event that will be televised on FOX Sports 1, including finals coverage on Sunday, March 18 at 7 p.m. (ET). It is the third of 24 races in what has already been a turbulent start to the 2018 NHRA Mello Yello Drag Racing Series season for Force.

But Force, who qualified fourth in Phoenix and won two rounds before the crash just past the finish line, insists the early-season incidents haven’t increased his drive to get back in the winning column. After posting just one win in 2017, that desire to get back to his winning ways was already sky high for Force, who was seventh in points a year ago.

“I really don’t need any motivation,” Force said. “I want to win and succeed no matter what is going on. I talk with all my crew chiefs and crew guys about having the heart and the fire all the time. These young guys keep me motivated and I trust them. I get excited every time I drive onto a race track. I won this race a lot but every year is a new year. I go after every win with the same fire in my belly. This race car does the running for me and I love being out at the track with the fans.” 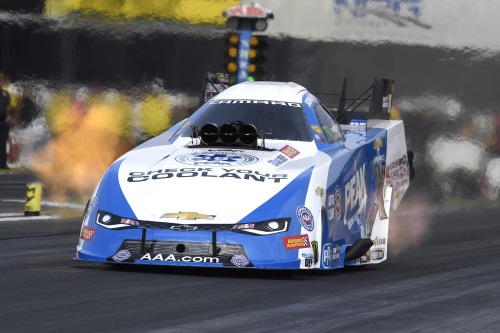 That will again be evident in Gainesville, where Force will face off with John Force Racing teammates Courtney Force and defending world champion Hight, as well as the likes of 2016 champ Ron Capps, points leader Matt Hagan, who won in Pomona, J.R. Todd, class newcomer Shawn Langdon and Cruz Pedregon. But racing in Gainesville is always special for Force, who will debut a new design on his car for the race as well.“I love going to all the race tracks,” Force said. “Gainesville has a lot of history. I won this race last year and I am looking to get another win this year. I’ll have a special paint scheme that a fan made for me. It has the American flag on my race car and I love it. PEAK does a lot of exciting things with this race car and I have a lifetime contract with them. When the fans see this design they will love it.”

As always, fans can interact with their favorite drivers with an exclusive pit pass to the most powerful and sensory-filled motorsports attraction on the planet. This gives fans direct access to the teams, allowing them to see firsthand the highly-skilled mechanics service their hot rods between rounds, and get autographs from their favorite NHRA drivers. Fans can also visit NHRA’s popular Nitro Alley and Manufacturers Midway, where sponsors and race vendors create a carnival atmosphere, with interactive displays, simulated competitions, merchandise, food and fun for the entire family.

WHEN:
Thursday through Sunday, March 15-18