March 28, 2018 – On a warm and sunny weekend in Texas, 17-year-old Parker Chase and co-driver Ryan Dalziel, drivers of the #19 Vertical Bridge / New Braunfels Convention and Visitors Bureau / ProBalance Protein Water / Music Movement Audi R8 showed persistence at the Circuit of the Americas in Austin, Texas. Taking on the Pirelli World Challenge SprintX GT Pro/Am program, Chase and Dalziel overcame an unfortunate shunt on the final lap during Saturday’s event to stand on the podium on Sunday.

After an overall tenth place qualifying effort that saw the young Texan start the wheel-to-wheel action third in class, Chase got a great jump on the field and made his way to the second position. Maintaining a steady gap to the class lead car, Chase finished his stint and handed the controls to sportscar star Ryan Dalziel. 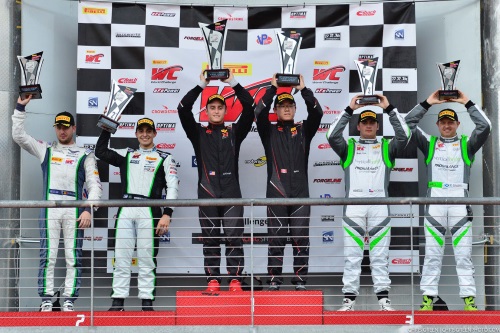 Holding on to P2 through the driver exchange, Dalziel immediately went to work on closing the gap, steadily cutting into the time of the leader. With the hour-long race coming to a close and a podium position waiting in the wings, Dalziel defended on the final circuit to hold an overanxious driver behind him. Sitting second in class and an impressive seventh overall and like the veteran that he is , the Scotsman forced his fellow competitor around the outside, which would not be the easiest pass to make. Holding the position only a few corners from the end, Dalziel was shunted from behind and off the circuit. With damage too severe to continue, the Pro/Am duo would be eliminated from the event.

“Our Audi was much better for the race than it had been all weekend,” explained Chase. “We were able to try a few things throughout the testing to produce a solid racecar in race conditions. A P2 finish was looking like it was in the bag, but unfortunately we were taken out with four turns to go. On to tomorrow.”

Back to the track Sunday and with the times from race one setting the grid for race two, Dalziel and Chase would start their quest for victory from outside row four in the eighth position overall, but third in class. With Dalziel taking the green, he quickly advanced forward into the second position in class and held his own, pacing the class cars until the pit stop and driver change where he handed driving duties to Chase. With the 17-year-old jumping behind the wheel, Chase continued to build his experience lap after lap. With the track length and long straight not ideal for the Audi R8, Chase and Dalziel ended the weekend on the final step of the podium with an impressive third place result. 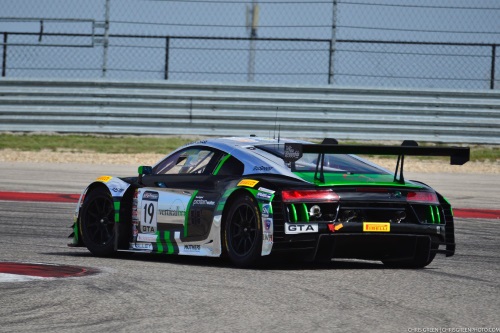 Chase continued, “I felt I had a very good race. Some calls did not go our way but that is racing some times . Finishing on the podium in front of all my friends, family and marketing partners was exciting. I would like to thank the more than 125 guests that came out per day for the support and enjoyed our trackside hospitality. It was awesome to have them on site and be able to deliver a solid weekend for them. I am already looking forward to Long Beach.”

“Parker drove flawlessly all weekend,” added Dalziel. “With the Audi underneath us and him as a co-driver and teammate, I know that we have a shot of winning each and every race weekend.”

Parker Chase will enjoy one weekend off before traveling to Long Beach on April 3rd. Taking part in the Long Beach Grand Prix Media Day, Chase will help promote the event and Pirelli World Challenge program. 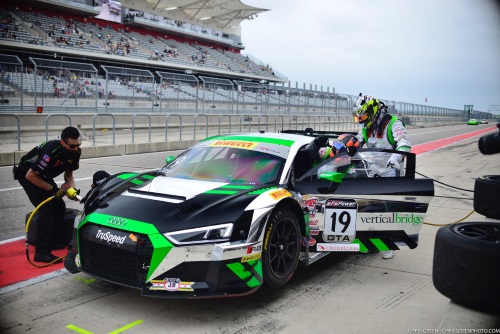