Absolute Racing serviced teams celebrated a 1-2 result in the opening round of the Porsche Carrera Cup Asia last weekend at the Shanghai International Circuit (14-15 of April 2018), with Philip Hamprecht taking the honour of winning the first race of the new season.

The opening qualifying session of the season took place on a grey-skyed Saturday morning with all Absolute Racing cars looking to make an impression.

Almost without surprise, Absolute Racing serviced teams staged 1-2 qualifying sweep for the 2018 opening round of the season. Hamprecht has secured the pole position for the first race of the season in an incident-filled qualifying session.

AAS Motorsport by AbsoluteRacing’s Maxime Jousse, who was the fastest on Friday’s Free Practice wet session, has set the second fastest time, only 0.054s behind the young German. Tanart Sathienthirakul posted the seventh fastest time in the session, while Yuan Bo was ninth.

Bao Jing Long (puncture) and Daniel Lu (accident) did not complete a lap and were forced to start from the back. 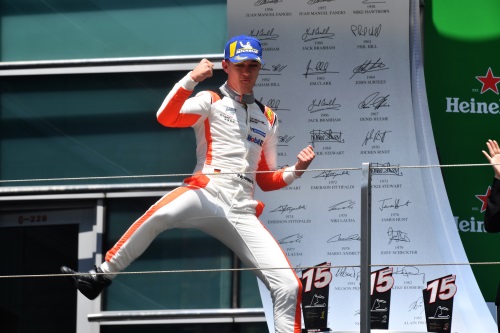 Philip Hamprecht led from start to finish in a largely uneventful but textbook-perfect race, covering the 12 laps around the 5.451-km track in 26 minutes 57.325 seconds, for an average speed of 145 km per hour. A Safety-Car period from laps 5 to 7 in order to retrieve a car from the track was unable to upset the Team StarChase driver, who maintained a narrow lead over his teammate Maxime Jousse.

2016 Porsche Carrera Cup Asia Vice-Champion Maxime Jousse received a last call to join this weekend’s event and he did not disappoint. The French driver qualified in the front row for the race and followed the leader closely before and after the Safety-Car period, eventually crossing the finish line in second position.

Tanart Sathienthirakul started seventh but lost a position at the start. The est Cola PTT driver was decided to get his position back but he went wide on T17 and dropped two places. He managed to get back one position after the Safety-Car period to finish 8th.

After a disastrous qualifying session on Saturday, 16-year-old Daniel Lu showed why he is one of the biggest talents of Chinese motorsports. The Porsche China Junior driver had an impressive back-to-front race from P27 to P9 at the flag!

Yuan Bo also showed strong pace in a variety of challenging weather conditions throughout the weekend but he wasn’t able to deliver his full potential on full-dry conditions in the race, crossing the line in 10th .

Bao Jing Long was a contender for the win in the Pro-Am class. However Zheng Tong Auto driver hopes to win in Shanghai were brought to an end by a puncture caused by an opponent contact in the first lap of Saturday’s qualifying session. With nothing to lose, Bao Jing Long raced at “full throttle” to third in the class and 13th overall.

Hamprecht’s win places him on the top in the Drivers’ championship standings. Team StarChase left Shanghai leading in the Porsche Dealer Trophy. 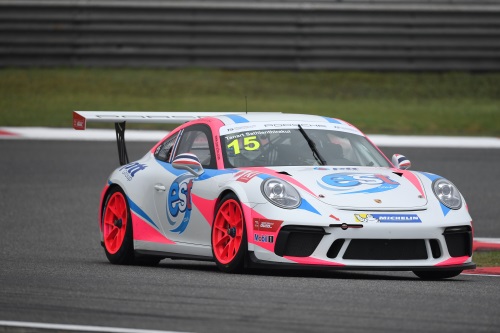 #15 est Cola PTT – Tanart Sathienthirakul (Position 8): “The race wasn’t so great for me, but we have had the pace. If everything went according to the plan, I should have been able to move from seventh to fourth, fifth or sixth. From seventh to go into the top three it is a bit difficult but I think I should have been capable of battling for the top six. I should be around there anyway.” 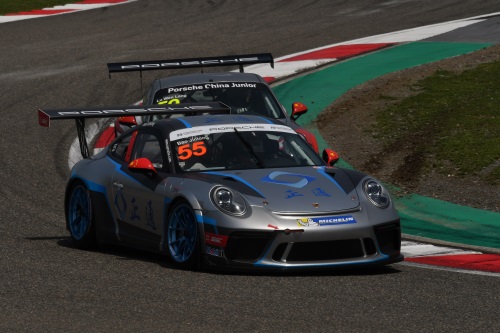 #55 Zheng Tong Auto – Bao Jing Long (Position 13 / Pro-Am 3): “We started the race from the last in the gird but I got a really good start, overtaking few drivers. Fortunately I could keep a consistent pace during the race. The only mistake that I made was running wide at a corner, but it didn’t cost me any places. Finishing 3rd is satisfying for me. Without that slip-up, P1 was definitely possible.” 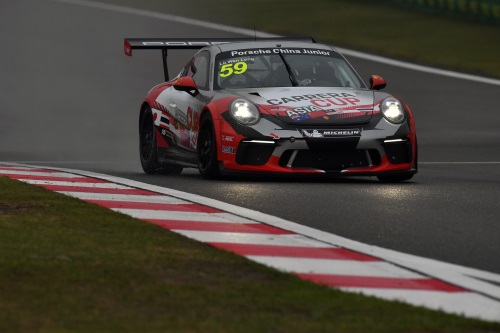 #59 Porsche China Junior Team – Daniel Lu (Position 9): “I had a good start; shooting away and taking four places immediately. One at a time, taking positions after positions, I started my way up. Then Safety Car came out and that helped me quite a lot. After the restart I overtook three more cars, getting me into my class positions. It was a really good come back, overtaking nineteen cars to P9. Today was a bit a bounce back from yesterday’s disaster.” 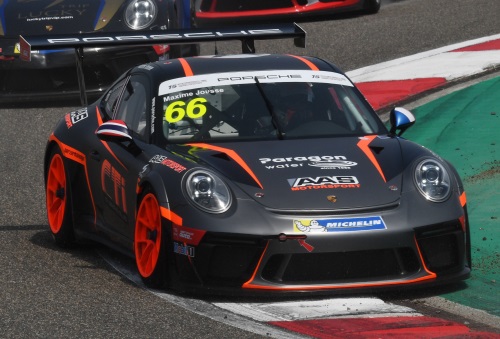 #66 AAS Motorsport by Absolute Racing – Maxime Jousse (Position 2): “It was a very good race overall with a P2 finish for me and Philip winning the race. It is a 1-2 for the team, which is quite good. The start was good and I found myself beside Philip but I had to defend my position too. In T3 I got a bump from behind, almost lost the car, but we completed the first lap still that second position. Then we had a very good pace. We were strong and we had very nice car with good behavior. I managed to close the gap to the first before the Safety-Car. After the Safety Car period ended I ‘charged’ again but I couldn’t find an opportunity to overtake. Meanwhile Chris joined the fight so I had to drive a bit more defensive to keep my position and score the maximum points for the team. A big thanks to Absolute Racing for the job, and congratulations to Philip for the win.” 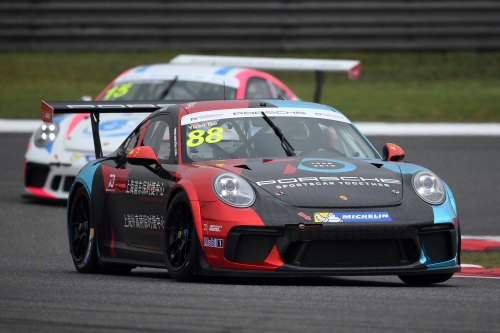 #88 Porsche Shanghai Waigaoqiao & Pudong – Yuan Bo (Position 10): “I didn’t feel good today. The race result was not what I expected. I am still looking for a better race pace. I am looking forward to the next round in Fuji.” 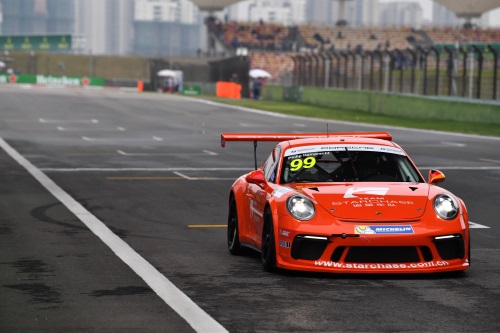 #99 Team StarChase – Philip Hamprecht (Position 1): “The race start was good, and the first five laps were good, putting a comfortable gap and held up until the end. The Safety Car didn’t do me well. I was struggling after the Safety-Car but Maxime was also struggling towards the end of the race as well so I managed to conserve my position. It was a great job from the whole team, Team StarChase and Absolute Racing. I am really happy for everyone.”

Fabien Fior (Team Manager Absolute Racing): ”A terrific result and a great way to kick off the 2018 championship. Philip completed an excellent race, without putting a wheel wrong from lights to flag, and Maxime was very strong all over the weekend. We are also pleased to have placed three other cars in top-10, including Daniel Lu, who had to start from the back of the grid after an unfortunate qualifying session on Saturday. One last word to Bao; who made a great comeback from last in the grid to the Pro-Am class podium. Hopefully this race will be a good indicator of what’s to come throughout the year. Now we have to head home and focus on Fuji.”