April 26, 2018 – American driver Colin Queen kicked off his 2018 European karting season with Ward Racing at the WSK Super Masters Series in March. With his first event cancelled due to inclement weather, the young Californian had to wait a few weeks to get his season started. Competing at well-known karting facilities such as La Conca and Sarno for the WSK Super Masters Series, Queen overcame qualifying blunders to show speed and drive forward as he begins his preparation for the 2018 CIK / FIA Academy Trophy.

“It was a difficult first event for me in La Conca due to an incident in testing that put me in the hospital for stitches,” explained Queen. “I was battered and bruised, but determined to compete in La Conca and did the best I could. While the results were not what I had hoped for, I learned a lot and will use those experiences moving forward.”

Involved in an incident that was no fault of his own, Queen, who up until this year had never raced outside the state of California above the Cadet level, would be struck by another competitor who had a braking issue and was out of control. With a high speed and heavy impact, Queen’s kart was destroyed and he was sent to the hospital to close a wound in his hand but remained in Italy to try and compete the following weekend. 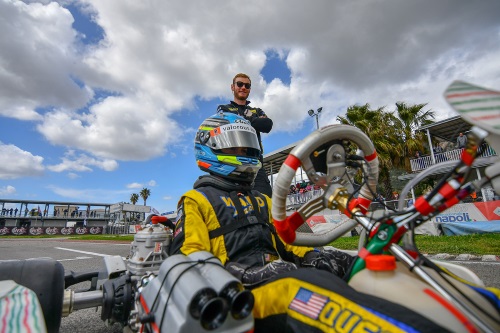 Progressing through the test days to ensure that his hand and body could withstand the challenge, Queen qualified his Ward Racing prepared Tony Kart in the 47th position in a stout field of OKJ competitors from around the world. Working hard through the heat race flight format, the American driver would take the green flag for his prefinal in 28th and was in position to transfer directly to the main event before a last lap incident only yards from the finish line took him out of the running. Showing speed and making moves like a European veteran, Queen took advantage of his starting position to perfect his passing as he advanced more than twenty spots on the difficult and challenging La Conca layout.

With time to heal and get his body back in better working order, Queen would make the trek to Sarno with some newfound experience under his belt. Looking to achieve his goal of advancing to the main event, the Ward Racing pilot would be behind the eight ball early as an unlucky qualifying effort would see him mired back in the 72nd position.

Queen continued, “I had some strong runs in the heat races and was able to start my wet prefinal in the 34th position. Having to finish in the top-seventeen to transfer to the final, I was able to move forward and claim the 17th and final transfer position, a huge accomplishment for both myself and the team after qualifying deep in the field.” 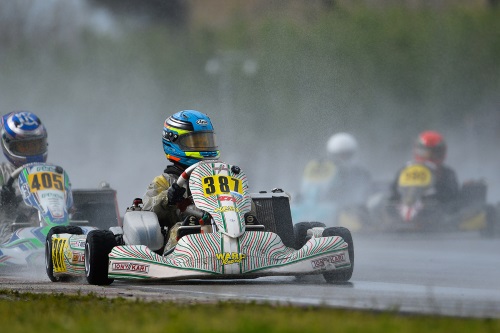 “Things did not go as planned in the main event but one thing that I have learned in the first two events is that I need to qualify better,” added the multi-time champion. “In both La Conca and Sarno, I put myself further back in the field than I should be and I am fighting to just stay alive, not for solid results. This is something that I am working on and I need to better use the new tires and grip in the timed practice sessions to gain a better starting position.”

Enjoying some time back home, Colin Queen is now set and ready for his next adventure. Traveling to Salbris, France for the opening round of the 2018 CIK/FIA Academy Trophy May 3-6, Queen will represent Team USA in the spec series that has bred some of today’s Formula One stars. Colin Queen will also be writing an EKN Blog on his experiences at the CIK / FIA Trophy Academy for eKartingNews.com.