TERRE HAUTE, Ind., April 30 — The 18th annual Sumar Classic USAC Silver Crown race Sunday night at the Terre Haute Action Track was a rollercoaster ride for Nolen Racing’s two drivers. In the end Chris Windom finished fourth for the Whiteland, Ind.-based team in a borrowed car. Jerry Coons Jr. qualified second out of 29 entries, led 10 laps, was in the top three or top five for almost all of the race, and ended up seventh.

Windom was very conservative during the bulk of the race, but came on like gangbusters at the end. Coons was in contention for at least a podium finish most of the race, but dropped back at the end due to brake issues that forced him to alter his entry into the turns and ultimately caused a tire problem. 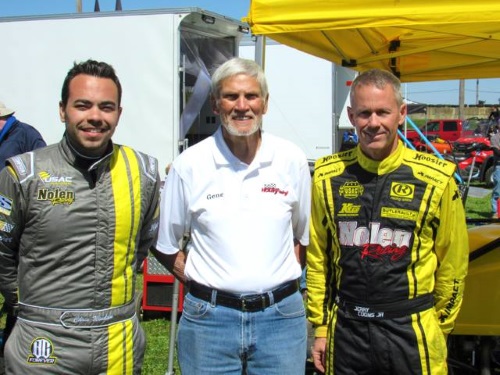 Windom had just set the second-fastest lap of his group in the final practice session when the brand-new engine in the Nolen Racing Maxim No. 17 sponsored by KECO Coatings and Indy Race Parts blew in Turn 4. An arrangement was quickly made for Windom to hop in Bill Rose’s No. 66 for the rest of the evening. Despite never having driven that car before, Windom qualified 13th at 24.289 seconds with a hastily lettered 17 added to the white 66, and he started 13th in the 25-car 100-lapper on the half-mile dirt oval. He also received a contingency award from Roger and Barb Tapy for being the lucky 13th qualifier.

Once the race started, Windom, of St. Louis, had already advanced to eighth by lap two. The defending race winner was seventh by lap six, and he stayed just out of the top five for most of the first half of the race, primarily running in seventh. He was ninth at the halfway point and tenth a lap later, saving his tires, but he was back in seventh by lap 54.

He was eighth with 25 laps remaining, but he moved into sixth with 83 laps down when leader Kody Swanson and the driver who was third, Shane Cottle, came together between Turns 3 and 4. Cottle stopped on the track and was done for the night. Swanson had to pit to replace a flat tire, and restarted at the rear. 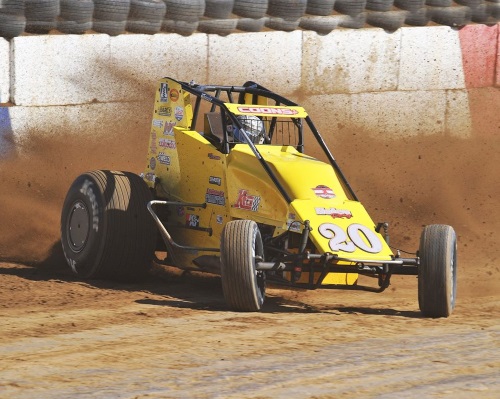 Jerry Coons Jr. slides through a turn at the Terre Haute Action Track Sunday
during the Sumar Classic USAC Silver Crown race. The USAC Triple
Crown champion qualified second, led 10 laps, and was in contention
throughout the race. (USAC photo by Gene Crucean)

Windom cracked the top five for the first time on the restart on lap 84 by passing Shane Cockrum. He fell back to sixth on lap 88 when Swanson passed him, and he was still in sixth place on lap 97. He passed his teammate, Coons, for fifth on lap 98 and then C.J. Leary for fourth on lap 99 to bring it home in that position, trailing only winner Justin Grant; Swanson, who regrouped for second, and polesitter Tyler Courtney. Windom was 3.766 seconds behind Courtney and 2.249 seconds ahead of the fifth-place finisher, Leary, at the end.

Coons, a native of Tucson, Ariz., now living in Greencastle, Ind., qualified second with a sizzling 23.004 to Courtney’s 22.990 with the Nolen No. 20 Maxim. He blasted off at the green and passed Courtney for the lead with an outside move in Turn 2 on the first lap, right before Brady Bacon brought out the first full-course caution on lap two. Coons led the first 10 laps, but then Leary passed him in Turn 2 on a restart to push him back to second. Grant slipped by to the outside on lap 13 to push Coons back to third, and then Cottle wiggled by on lap 14 to relegate Coons to fourth.

Coons stayed in fourth place through lap 51, dicing repeatedly with Cottle in a fight for third in one of the best battles of the race as the field approached the halfway mark. Cottle moved into second on lap 48 and Coons then attacked Leary for third. He got the spot on lap 52 when both he and Swanson passed Leary.

Two laps later Coons was back in second when he passed Cottle. He remained in second place until Cottle got him back in Turn 3 on lap 65 on a restart. Coons stayed in third place from that point until Swanson passed him on lap 72, and he ran in fourth from lap 72 until he advanced back to third after the Swanson-Cottle incident with 83 laps down.

He had been dealing with the brake issue for some time, however, and it took a toll on his car’s tires. Courtney passed him for third with 10 laps to go, and Swanson pushed him back to fifth on the following lap.

It still looked like Coons would get a top-five finish, but with two laps to go Windom passed him to push him back to sixth, and Cockrum got by on the last lap to relegate Coons to seventh. Coons was just 0.600 of a second behind Cockrum at the checkered, and a full lap ahead of the eighth-place finisher, Joe Liguori. 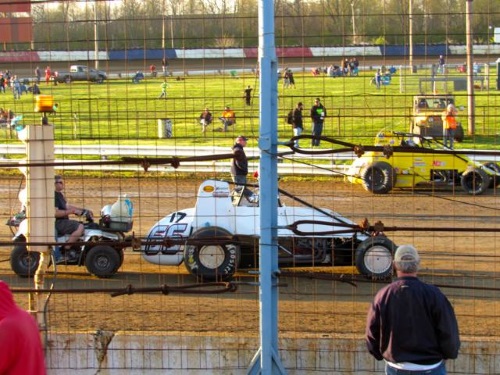 Chris Windom is pushed to the grid in the No. 66 normally driven by Bill Rose, as Jerry Coons Jr. waits to get underway in the famous yellow Nolen Racing No. 20.

Windom is now third in the point standings and Coons is fourth. The next race, the Hemelgarn Racing/Super Fitness “Rollie Beale Classic,” is this coming Friday, May 4, at Toledo Speedway in Toledo, Ohio.

Chris Windom: “The engine let go in the 17 with no warning. I want to thank everyone on my team and Bill Rose for letting me jump in his ride for the race.

“I was very conservative, and just tried not to go a lap down during most of the race. I was trying to save my tires for the end. So to get a fourth out of it in a car I never sat in before, I’ll take it.”

Jerry Coons Jr.: “For some reason we’ve had some issues with our brakes on half-mile tracks. Eventually I just had to slide on entry; I couldn’t get into the corners right due to the problem with the brakes, and I just wore down the tires. I was waiting for a tire to blow; one of them in particular was really bad at the end. At one point the vibration was so bad on the backstretch that it shook the whole car so badly I couldn’t even see. We’ll have to see what we can do to solve that brake problem for the future.”

USAC’s Web site is at USACRacing.com.