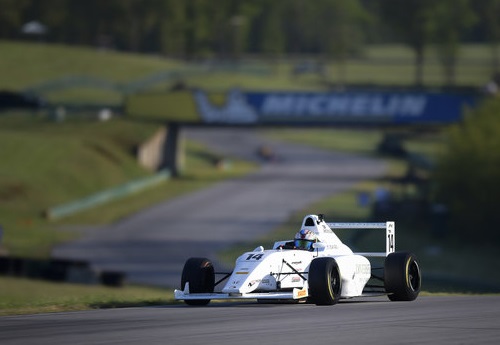 May 1, 2018 – Kicking off his 2018 racing season this past weekend, New Yorker Dylan Tavella would take on the opening round of the F4 United States Championship Powered by Honda. Competing at the Virginia International Raceway (VIR) which features a long, fast and flowing circuit, Tavella gained experience while decreasing his lap time throughout his debut weekend. Under the guidance of the Miller Vinatieri Motorsports crew, the multi-time karting champion and future motorsports star completed the weekend damage free and is already looking forward to the next one.

“Entering the weekend, I had expectations for my first event as well as for the season,” expressed Tavella. “I was able to check a lot of boxes at VIR and will work with my team to reset future goals.”

A disappointing qualifying run on Saturday morning left Tavella down the running order due to no fault of his own. With the short timed session and incidents causing yellow flags to litter the circuit, Tavella could only get one lap at speed as he looked for open space to be free of traffic.

“I wanted to have a better qualifying debut but caught out with some cautions and did not really get a quality lap on new tires,” explained the Miller Vinatieri Motorsports driver. “It is ok though. I need to gain experience in passing so why not check that box off the list early in the year.”

Race one would see Tavella work his way forward as he decreased his lap times and gained that experience he desired. Quickly moving into the top-twenty and then again in to the top-fifteen, the Massapequa, New York resident ended his debut race in the 19th position.

Back to the Virginia International Raceway on Sunday for rounds two and three of the season, Tavella showed huge improvement in race two driving a superb event as he continually marched his way forward in the field. Forced to start 27th due to his fastest race lap from race one, the Diversified Private Wealth Advisor backed driver turned heads by once again staying out of trouble scoring a 14th place finish.

Tavella added, “Race two went really well. I turned my fastest lap of the weekend and had much better pace. It is all about learning right now and I am taking it all in.”

Sunday afternoon would provide the landscape for race three with Tavella taking the green from row eleven in the 22nd position. Such as it was in the previous two races on the weekend, Tavella once again charged forward to the 14th position before eventually closing his weekend in P16.

The F4 United States Championship Powered by Honda will enjoy a few weekends off before traveling to the challenging Road Atlanta facility in Braselton, Georgia on the May 10-12 weekend.

For more information on Dylan Tavella including news, profile, media and contact information, please visit him online at www.DylanTavella.com.