Toronto, Ont.  (May 7. 2018) –  Mississauga-born driver Lindsay Rice will take the all-new Audi RS3 race car into competition for the first time ever.

After two successful seasons competing with the #18 Rice Racing Porsche 911, Lindsay Rice will take another step forward in her career in the new Audi race car this season.

Rice will make her debut in the new car during Victoria Day Speedfest at Canadian Tire Motorsport Park on May 18-20 with the Canadian Touring Car Championship.

The Audi will be classified as a GT Sport contender, the category where Rice competed in the #18 Rice Racing Porsche just last year.

Lindsay returns to the competitive stage with her team Rice Racing for a third year, and with continued support by her mechanic team, Bestline Auto Tech from Vaughan, Ontario. 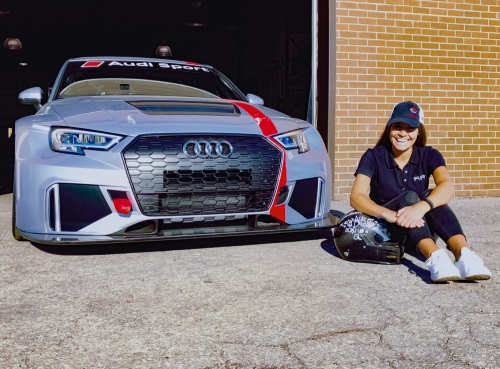 “I cannot express how truly excited myself and my team are about competing in this new Audi,” Rice states, “After taking our first look at the race car, we’re all very impressed. I get to test the car this week at Canadian Tire Motorsport Park and I am really looking forward to seeing the engineering that Audi has put into it. I know it will be made of quality, and that the car will be much different than my 911. All I can say is, we have an exciting 2018 season with this car ahead.”

In addition, Lindsay Rice announces that she has partnered with Total Canada for a second season.

“Total Canada has been a fantastic partner since 2017. Not only are they a great team of people to work with, they have also become a part of the Rice Racing family. They will support the new Audi RS3 LMS with me for this second season – which I am truly grateful for. I look forward to bringing them some results in competition.”

About Lindsay Rice:
Lindsay Rice, age 26, participates in Grand Touring competition across Canada and the United States. After three years of racing, she has achieved 9 podium finishes and won a first place just last year. Lindsay is an athlete, and an established businesswoman in marketing and brand recognition. She is the driver for Rice Racing as well as the working CEO.