TOLEDO, Ohio (May 9, 2017) — The upcoming Menards 200 presented by Federated Car Care at Toledo Speedway is the fifth of 20 races in the 2018 season. According to ARCA Racing Series presented by Menards championship leader Sheldon Creed, it’s not too soon to think about points.

“We’re for sure thinking about it,” said Creed. “We just gotta keep being smart. One bad week can put us behind. We’re still coming to win; we just need to be smart about it.”

So far Creed and his MDM Motorsports team have been “smart about it.” The Alpine, Calif. driver has not finished worse than fourth after four events. His best finish so far was second at Nashville. He was third at Daytona and Salem, and fourth at Talladega.

Creed tested at Toledo last week. He also picked up on some “tricks of the trade.” 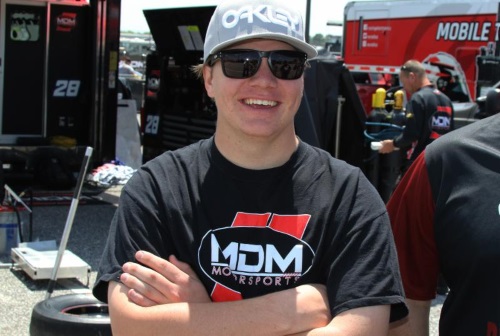 “It was nice when we went to test. We learned a few little tricks…having the left side tires off the track in three and four helps pull the car around. It also loosens you up, so you have to be careful with that. But that trick is there when you need it. You can hang it off in one and two on the rumble strips for the same thing if you have to use it.”

Hanging tires out “off the track” seems a little risky. Good thing Creed was comfortable before he left.

“I feel like I’m really comfortable after testing last week. We made one long run…I think it was 17 laps. We stayed pretty neutral. We have a few things to work on; but we’re pretty happy with it.”

Creed attributes his lead in the points to consistency.

“We’ve been very consistent. That’s what it takes to win championships; but we want to win one, sooner the better. This is the hardest win I’ve ever tried to get.”

Discounted tickets for the 77th running of the Menards 200 presented by Federated Car Care at Toledo Speedway coming May 20 are on sale at six Menards stores in northwest Ohio. The tickets are on sale for the special price of $15 between now and Saturday, May 19 if purchased at Menards. The Menards stores selling the discounted tickets include Defiance, Findlay, Holland, Oregon, Sandusky and Toledo, Ohio. Children under 6 are free.

Toledo Speedway is the home track for the ARCA Racing Series. ARCA is in its 66th consecutive season of competition.

The race at Toledo marks the third among the 11 races that make up the Sioux Chief Short Track Challenge.

Weekend Schedule
The Menards 200 spreads out over two days with ARCA Racing Series practice scheduled from 12:30 – 2 p.m. Saturday, May 19, followed by General Tire Pole Qualifying at 4. The ARCA-sanctioned Aramark Sportsman cars will conclude the festivities Saturday with a feature event race. Pre-race ceremonies for the Menards 200 presented by Federated Car Care get under way at 1:30 Sunday afternoon, May 20. The Menards 200 is live on MAVTV at 2 p.m. Eastern Sunday afternoon.