Just one month after the promising season opener at Sepang International Circuit, Absolute Racing heads to Thailand for Blancpain GT Series Asia Round 3 & 4 this weekend (11-13 May).

The second event of the 2018 season takes the Audi R8 LMS-equipped team and its drivers to the Buriram’s Chang International Circuit, a stunning 4,554km FIA Grade 1 circuit designed by renowned track architect Hermann Tilke just hours away from the capital of Bangkok.

The #37 Paragon Water Systems Audi R8 LMS pair Anthony Liu/Josh Burdon travels to Thailand in a positive mood following a well-earned second place finish at Sepang. Round 2 pole-position Josh Burdon made a big impact upon his debut in the series, which holds big promise for the season ahead. The young Australian will be striving to recreate his heroics from Sepang this weekend and his Chinese teammate wealth of racing knowledge should stand them in good stead for the weekend ahead, even if they will have to overcome a 10-second pitstop success penalty in the first race – imposed for finishing second in Race 2 at Sepang.

Teammates Cheng Congfu and Martin Rump narrowly missed out on securing an overall podium in the first event of the season but the #7 Audi R8 LMS duo leads the Silver Cup tables after superbly winning the class in Sepang. Cheng and Rump both know the circuit from last year’s Blancpain GT Series Asia race and Audi Sport R8 LMS Cup previous visits, and expect them to use all their experience to position themselves in the top-places’ fight.

Adderly Fong and Andrew Kim faced an unfortunate start to the season in Malaysia but Kim continues to learn and impress aboard the #7 Audi R8 LMS as Fong’s pace around the fast and flowing circuit was nothing short of impressive. They collected a Pro-Am fifth place in Round 2, and it will be interesting to see what they can do with more practice time.

Team Director, Fabien Fior said, “We are really excited to go back to Thailand because the racing atmosphere and crowd there is always fantastic. I’m sure we will see a tough battle but we are all really motivated to perform strongly. Our drivers are very motivated to get the cars on the podium and win races again. They fought hard in Sepang and never gave up. The whole team has this fighting spirit so we go to Buriram with big hopes.” 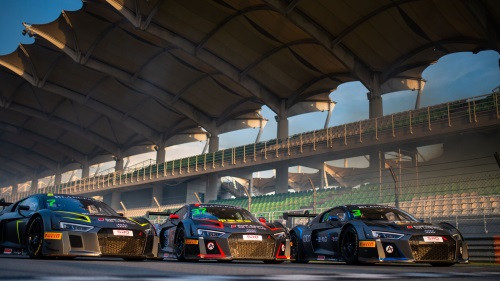