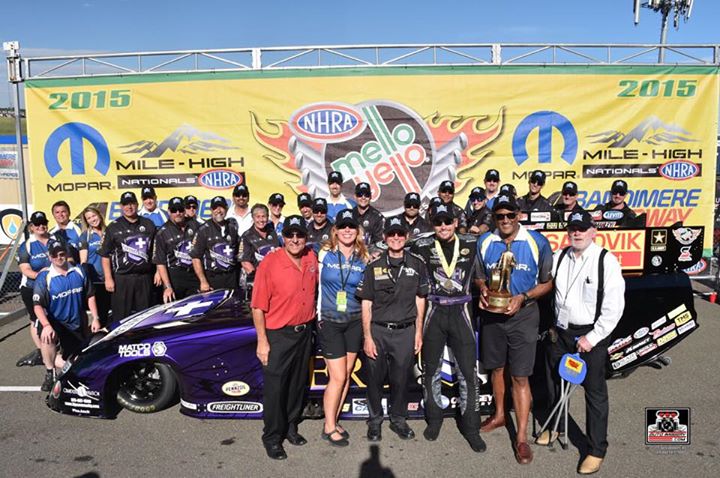 MORRISON, Colo. (July 25, 2015) – The journey up the mountain often is better than the view once you get to the peak.

Consider that the first time the quartet work together was this year’s opener at Pomona, Calif., when the team failed to qualify to race in championship eliminations.

Since then, the climb up has been steady and on Sunday at Bandimere Speedway near Denver for Beckman and the Infinite Hero team won for the fourth time in 14 races and moved to second in the Mello Yello standings. 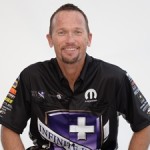 “We go to Pomona, we DNQ, we leave 18th out of 18 cars in the nation,” Beckman said of Sunday’s triumph near Denver. “Dead last. I was fine with that because I knew we were going to be OK this year. This is the fruits. We won’t win every race but we have a car that can.”

The four wins is the most for Beckman in one season and 10 races remain.

And nothing tops beating the best.

“To go out there and beat the No. 1 qualifier, the winningest driver of all time and do it at the Mopar race at Bandimere … this is just a perfect weekend,” he said.

Team owner Don Schumacher added, “A gratifying win. It was tremendous for Jack to go out there and win this race for Mopar, for DSR and to take that Force car out in the final with John driving it.”

“Jimmy is just absolutely incredible, he’s bold. Here’s the deal, we know what Jimmy is capable of, we know John Medlen’s reputation. I hope that this starts to put Chris Cunningham on the map too because I wish you could see the way they interact up there. Chris is so much more than an assistant. (Chris) and Jimmy are bouncing ideas, and John has his own computer. The harmony there is perfect.”

The Mopar Mile-High Nationals is the first of three races in three weeks that comprise the Western Swing that will include Mello Yello races at Sonoma next weekend followed by a trip to Seattle the following week.

The Mopar President’s Award was created to recognize motorsport pioneers and legends who have been affiliated with Mopar throughout their career.

Previous recipients of the Mopar President’s Award include Allen and Roy Johnson (2013), the man regarded as the “Father of the HEMI,” Tom Hoover (2014), and drag racing legend “Big Daddy” Don Garlits (2015).