Bowmanville, May 22, 2018 – Kevin Lacroix took part in the Clarington 200, the season opener of the NASCAR Pinty’s series at the Canadian Tire Motorsport Park (CTMP) during the Victoria Day Speedfest. He had an incredible race which he surprisingly and disappointingly finished in 5th position, after an incident on the last lap.

The weekend did not unfold as predicted mostly due to bad weather conditions which prevented most of Saturday’s race events. The qualifying round was cancelled due to fog and the drivers started the race based on their 2017 Championship Points standings. 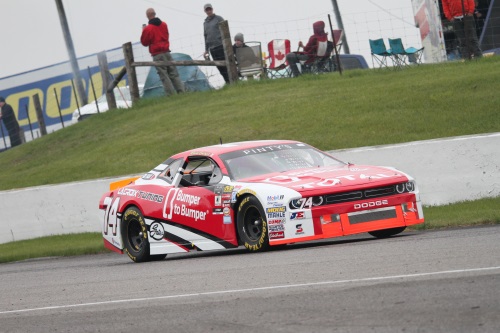 Accordingly, the Saint-Eustache native had the pole position and seemed unbeatable on this 5km track which has given him a record number of wins. Kevin had a fantastic start behind the wheel of his #74 Bumper To Bumper/ Total/ Go Fast / PFC Brakes/ Gates Corporation, dominating his opponents by taking an insurmountable advance, clearly anticipating a 4th win on this track.

However, as every good NASCAR race end, the action was left for the last few laps.

Kevin, battling with Alex Tagliani, Andrew Ranger and Louis-Philippe Dumoulin, was still a serious contented for the first place when at corner 5, Andrew Ranger hit him in the rear right wing causing Lacroix to spin out of the track, and causing a penalty to Ranger.

“The accident at the end of the race is very unfortunate,” recalls Kevin. “I made some mistakes in the last laps that allowed Andrew to get closer to me. However, we were very fast during the race and we have an excellent car for the rest of the season. The Bumper to Bumper team performed very well during both pit stops.”

Nonetheless, Lacroix came back and finished in the Top 5. This position does not reflect the Bumper to Bumper team’s efforts, who will be back in strong position for the next event; the Ranking 200 at Jukasa Motor Speedway this coming June 16.

“It was a very fun race,” said Lacroix after the event. “I had a lot of pressure from Gary Klutt, L.-P. Dumoulin, Alex Tagliani and Andrew Ranger so it wasn’t a boring race.”

Kevin wants to thank his sponsors Bumper to Bumper, Total, Go Fast, PFC Brakes and Gates Corporation, a partnership between growing companies that represent excellence, ambition and victory. “A top 5 to start the season is not bad, but it’s a win that we want for the next event.”