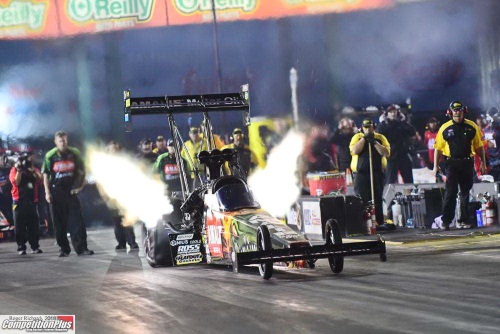 TOPEKA, Kan. (May 22, 2018) – Terry McMillen and his AMALIEⓇ Motor Oil XTERMIGATORⓇ Top Fuel team made the most of a rain delayed race that didn’t complete until Monday. McMillen added Topeka to his final round appearances of the season, which also included Houston and Charlotte.

“It was a long weekend, but a good weekend,” McMillen said of the Monday finale to the Menards NHRA Heartland Nationals

McMillen qualified sixth and raced past Mike Salinas, Billy Torrence and points leader Steve Torrence before falling to Clay Millican in the final round.

“We came here to win,” McMillen added. “But, it’s hard to be disappointed about the weekend. We’re pretty excited about how we’re doing right now. The wins will come if we can keep putting ourselves in this position. I can’t wait to get back out there and race again. I think Rob (Rob Wendland, Crew Chief) could get this car down a dirt road. Our 60 foot times are getting better, my reaction times are picking up with the better 60 foot times. I really feel like we can make a run at this Championship and the summer months are going to be where we can shine.”

McMillen has won 53% of elimination rounds so far this season and has posted more than twice the round wins through eight races (9 in 2018 vs. 4 in 2017).

“We just need to keep our heads down and keep working hard. Nothing can take you from hero to zero like drag racing.”

The rain delay also made for some interesting ‘watch parties’ on Monday. Amalie executives were able to sign in to NHRA All Access and watch McMillen make his Monday passes. “I can’t say enough about the support that Amalie gives me and this team,” McMillen said. “Seeing the photo of them all gathered in the conference room cheering us on is a real inspiration to me and this team.”

McMillen’s next stop on the NHRA Mello Yello tour is the Route 66 NHRA Nationals in Joliet, Ill. May 31 – June 3rd.

Before heading to the Chicago area, McMillen will try his hand at circle track racing on Friday May 24th at the Kalamazoo Speedway during the Lane Automotive night. McMillen and the XTERMIGATOR will also make an appearance at the Lane Automotive Car Show on May 25th in Watervliet, Mich. 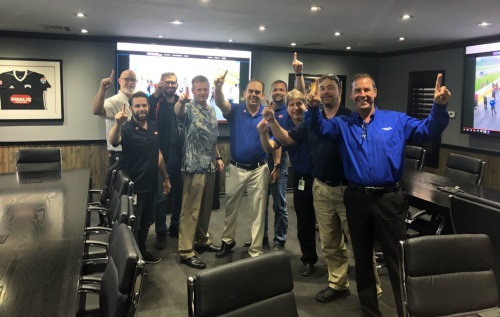