TULSA, OK (May 22, 2018) – At least they know his name. Despite recording a DNQ this past weekend in his NHRA E3 Spark Plugs Pro Mod Series debut, veteran drag racer Keith Haney left Heartland Motorsports Park in Topeka, KS, having made his presence known and feeling thoroughly encouraged by the experience.

The Menards NHRA Heartland Nationals presented by Minties opened for Haney with a ceremonial reveal of his new Summit Racing Equipment 2016 Camaro owned and prepared by three-time NHRA Pro Mod World Champion Rickie Smith. Fans and media alike were wowed by the aggressive red-white-and-blue scheme that screamed Keith Haney Racing and prominently displayed his unique “You Know My Name” catch phrase on the car’s doors. 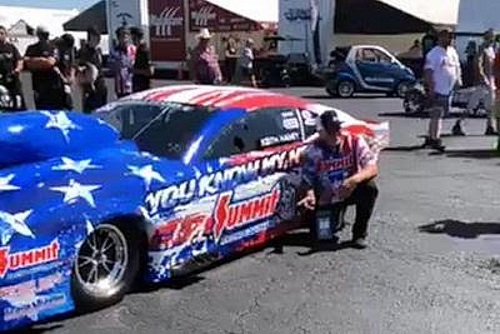 “Chris Davis and his guys at Kryptonite Kustomz did a great job on the wrap and gave me and Summit a look like no other in all of NHRA,” Haney stated. “It’s loud and in your face, just like I am sometimes, and I think it kind of stole the show, at least during qualifying.

“But seriously, I can’t thank NHRA and Summit Racing enough for all the hospitality and attention they showed me there,” he added. “To be honest, I was humbled and blown away by the reception we got there from the other Pro Mod drivers, fans, media, even drivers from other classes, who all came up and let me know they were happy to see us out there.” 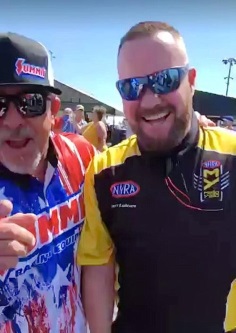 Haney singled out NHRA Vice President of Racing-Administration Josh Peterson and announcers Brian Lohnes and Lewis Bloom for their support, and reserved special appreciation for the Fox Sports crew and NHRA staff working the top end of the track who never failed to greet him after each run.

“It was so cool, they would come up to me asking, ‘What’s your name?’ and then explain they’d been watching me race for years in Radial vs. the World and with the Mid-West Pro Mod Series. I was so impressed by their knowledge of the sport beyond NHRA and how dedicated they are to the sport in general,” Haney said.

After earning his NHRA advanced-elapsed-time competition license just a week earlier at Osage Casino Tulsa Raceway Park, a facility he co-owns with fellow racer Todd Martin, Haney was first down the track with a solo pass in Pro Mod qualifying Friday afternoon in Topeka. In his first true full quarter-mile pass under power he promptly laid down a solid 5.90-seconds pass at 245.60 miles per hour, easily the quickest and fastest he’d ever been. 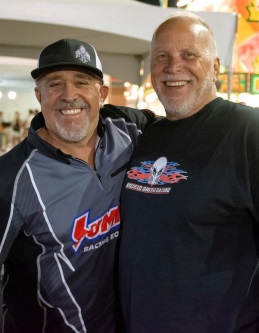 Still, despite placing 9th when Q1 wrapped up, the Tulsa-based new car dealership owner wasn’t satisfied with his performance, recognizing he has a lot to learn about the nuances of covering a quarter mile at speeds approaching 250 mph. After primarily racing the eighth mile the last three decades, Haney said Smith stressed how crucial it is to remain in “the groove” at high speed, especially over the second half of the track.

“The track isn’t prepped to the same degree down there and in that first qualifying pass I was over driving the car,” Haney freely admitted. “The groove narrows down quite a bit and it’s like ice if you get over toward the edges. You know Rickie doesn’t pull any punches and he told me later I was lucky to get away with that one. But I feel very fortunate to have people like Rickie and my crew chief, Brandon Switzer, out there with me. These guys have done everything there is to do in Pro Mod, so yeah, I listened to their advice.”

When round two of qualifying arrived, Haney lined up beside veteran Mike Janis and posted an early shutoff 6.26 at 178.10 mph, later explaining he ran into the same “over-driving” tendency from his first pass. 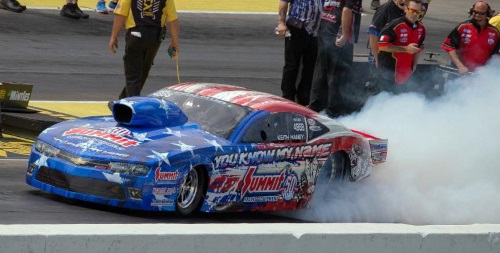 Haney’s first NHRA Pro Mod pass went off without a hitch, delivering a 5.90 ET that had him 9th after one round of qualifying.

“Had I not overdrove the car in Q2 it was on track for a high-.84, low-.85 pass, so that was on me and I can’t be upset about not qualifying because I just didn’t do the best job I could as a driver,” he said. “And I’m fine with that, or I should say I’m fine with the reason. Obviously I wanted to qualify, but I also realize there’s a learning curve I’ve got to follow.”

Regardless, Haney remained 14th of 24 entries when Friday drew to a close and said he appreciated the advice and encouragement of several NHRA veterans, including several Pro Mod drivers and Topeka’s number-one qualifier in Top Fuel, Clay Millican.

“Clay told me how excited he was to see me and said I was like a breath of fresh air for the NHRA. He was very complimentary of my arrival on the scene and I really appreciated him taking the time to visit,” Haney stressed. “I also found out that 98 percent of the Pro Mod guys are very welcoming and happy to see me and a big sponsor like Summit enter the class, but I also discovered there’s still that one or two percent who don’t want you there, who are jealous or whatever. But that’s their problem, I can’t worry about that.” 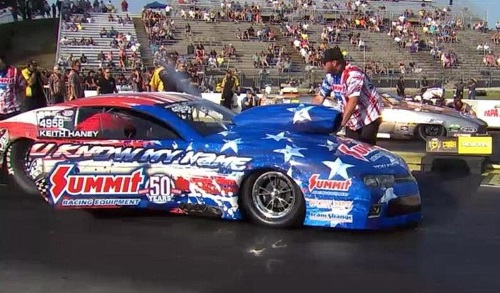 Haney ran into some nitrous pressure trouble on the starting line for Q3 and was forced to abort the attempt.

On Saturday, Haney was scheduled to make his third qualifying attempt alongside Todd Tutterow, but opted to shut down his nitrous-boosted, Pat Musi-built engine when the nitrous gauges showed no pressure after his burnout. Smith and Switzer quickly dove in to diagnose the problem, but Tutterow rolled forward and pre-staged, forcing Haney to abort the attempt and leaving Smith fuming.

“Rickie was like a papa bear, not happy at all; there was a lot of drama on the starting line,” Haney revealed. “Everything was working, the purges were working, but there was nothing on the gauges so I didn’t want to mess up someone else’s engine. It’s not my car, so doing something bad to it was not okay with me. I wasn’t about to let go of the button not knowing what might happen. Rickie and Brandon both said they would’ve gone, but Rickie later said if he was in my position he’d have done the same thing so I know it was the right decision.”

That left only the fourth and final qualifying session to run, with Haney paired up with Doug Winters, another long-term veteran of the series. Haney got away quick, but a significant engine explosion ended his run less than 100 feet down track. Haney dispelled any notion of it being a tuning error, however, explaining the fireworks originated in the car’s transmission. 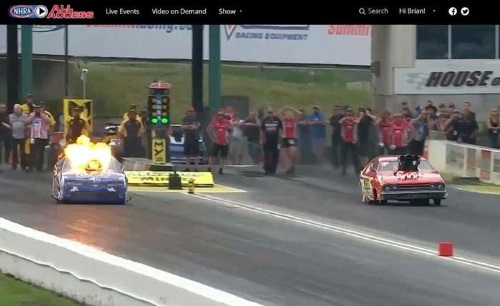 “I let go of the button, the car was going straight, everything was looking good, and then the reverser broke. When that happened it made the motor hit the high-side chip and it backfired, but it wasn’t a nitrous backfire,” he emphasized. “It’s too bad, too, because Brandon had it pegged for a 5.81, maybe .82, somewhere in that area, which would’ve put me solidly in the show, but it just wasn’t meant to be.

“But you know what? The text messages and a couple of phone calls I got after qualifying from the racers themselves was absolutely awesome. They reminded me not to pay attention to the haters out there,” Haney said. “I mean, I know I’m a cocky guy and I invite some of that myself, but it was great to hear that support from NHRA racers who really know what we’re up against. And I promise you, it’ll be a totally different outcome the next time because I’m going to implement some new things before I even get there.”

Haney confirmed he and his NHRA team will be even more prepared for success their next time out in September before heading to Gateway Motorsports Park, near St. Louis. He also will race in NHRA Pro Mod the next month at the Texas Motorplex, south of Dallas.

“This weekend wasn’t a total loss because even though we didn’t qualify, Summit was happy, Strange Engineering was happy, Lucas Oil was happy. It’s not always just about qualifying and winning,” Haney concluded. “It’s about how much people were paying attention, how much they were talking about you, how much value you bring to the table, how much they like you, and in that respect I think we hit it out of the ballpark.”