North Dinwiddie, Va.(June 11,2018) – Terry McMillen and his AMALIEⓇ Motor Oil XTERMIGATORⓇ team continue to build towards their best season, posting his third #3 qualifying effort of his career and an opening round win at Virginia Motorsports Park against Terry Haddock. In round two of eliminations, McMillen faced points leader Steve Torrence in a close showdown that found McMillen with the quicker elapsed time but 0.0077 seconds short at the finish line, giving Torrence the hole-shot victory. McMillen’s 3.796 run was the best of eliminations and second best of the event. Torrence’s .071 reaction time to McMillen’s 0.81 was the difference in the race.

“I really hate being on that end of losing,” McMillen said of the loss. “I never saw him (Torrence). I could hear him, but I couldn’t see him. It was just a good old fashion drag race.”

Torrence would go on the win the event.

“Overall it was a good weekend. We got another round win. Our team is performing, Rob Wendland (crew chief) has the car performing, we’re in the thick of things. If we keep performing like we have through these first 10 races we’ll be right where we want to be when the Countdown starts.”

McMillen now has 10 round wins through 10 races in 2018 and three final round appearances in the past seven races, by far the best start of his career. He stays seventh in the standings, moving three points ahead of Brittany Force and just nine points behind Antron Brown.

The next stop on the NHRA tour is the NHRA Thunder Valley Nationals in Bristol, Tenn. June 15th-June 17th. McMillen qualified third at Bristol in 2012. 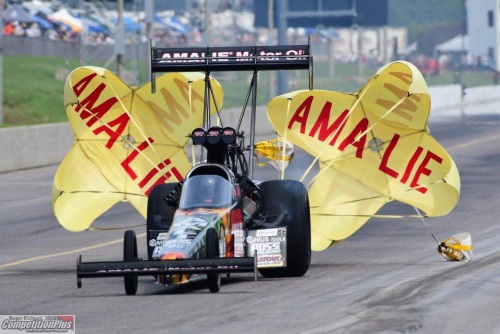