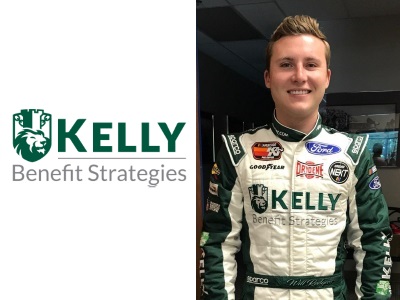 “I’m very thankful for KELLY Benefit Strategies partnering up for the K&N road courses in 2018. Given our success last year, I am confident we will deliver great results for them. My goal for all of these races is to match my results last year if not best them with an additional win at Sonoma. Jefferson Pitts Racing always brings top notch equipment to the race track and I’m excited to be racing with them again after my recent runs in the ARCA Racing series,” said Rodgers.

ABOUT KELLY BENEFIT STRATEGIES
Since 1976, KELLY Benefit Strategies has delivered premier employee benefit consulting and is a trusted partner to businesses of all sizes. KELLY Benefit Strategies provides the foundation for innovative strategic vision through its unique integrated Total Benefits Solution® — combining expertise, administration, and technology to help clients save time, maximize the value of their benefits investment, and control the cost of these benefits.

ABOUT WILL RODGERS
Will Rodgers is a 23-year old professional race car driver now emerging as a top prospect in the current list of who’s who among young American racers, as he was recently announced as a member of the NASCAR Next.

Born in Hawaii, in 1994, Rodgers was introduced to go-kart racing at the age of nine. Within 18 months he was the reigning Hawaii state champ and track record holder in Maui. After his family moved to the Mainland, Rodgers garnered karting sponsorships and raced successfully for several years in California. Rodgers then followed his heart and switched to motocross racing; once again becoming a regional champion. At 17, Rodgers became a successful action sports cinematographer, earning enough money to purchase an off-road racecar, which he drove to a West Coast Championship. Rodgers’ work and racing evolved into racing sports cars where he became the 2015 Mazda Sports Car Champion.

Rodgers is truly a self-made racer and shining star of the American motorsports landscape, making him an excellent brand ambassador for his sponsor partners, KELLY Benefit Strategies and Drydene Performance Products. He has a rare gift of combining his on-track performance with both the business aspect and fan side of motorsports.