Saint-Eustache, June 14 2018 – Kevin Lacroix is ready for his first event on an oval track in the NASCAR Pinty’s series this Saturday, June 16. Lacroix will attempt a first win of the season at the Jukasa Motor Speedway in Hamilton, Ontario during the Rankin Construction 200 with his Dodge Challenger #74 Bumper to Bumper/ Total, Gates/ Go Fast/ PFC Brakes.

“I feel confident for this 200-lap race” states Kevin. “We had obtained good results on this track last season. We had started at the back of the field because of a bad qualifying and we wound up leading the pack before going on pit road to change the tires. Back on the track, one of the new tires had a problem, so we finished 5th.” 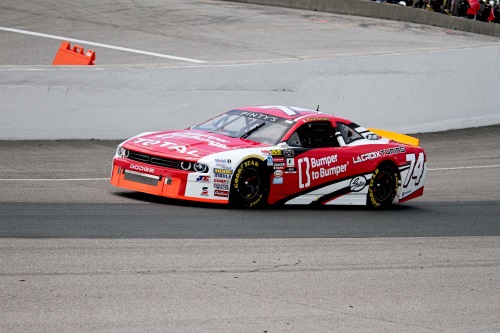 “For this event, I will be happy to finish in the Top 3, although we always want to win”.

Last season, Kevin Lacroix was the driver who lead to most lap on an oval circuit. This year, he will try to repeat this feat while attempting more wins.

Kevin was on his way to his first win of the season at the Canadian Tire Motorsport Park earlier in May when a competitor bumped him out of the track on the last lap, preventing the Bumper to Bumper team to earn a podium. Lacroix nonetheless finished the event in 5th place, placing him in 4th position in the Driver Championship with the same amount of points than American Noah Gragson who will not be present at the next race.