Hamilton (ON), June 17 2018 – Kevin Lacroix scores his first win of the season at the Jukasa Motor Speedway in the NASCAR Pinty’s series on Saturday night. The Saint-Eustache native drove his Dodge Challenger #74 Bumper to Bumper/ Total, Gates/ Go Fast/ PFC Brakes to his first oval victory, but also to his 9th career win in this series. This first-place finish puts Lacroix as the leader of the Driver’s Championship.

It was during the Rankin Construction 200, an event that lasted 204 laps, that Kevin Lacroix had a stellar drive. Although the practice session and qualifying proved to be slower than expected as Kevin started the race from the 4th place, the car prepared by crew chief Don Thomson was excellent throughout the entire event. 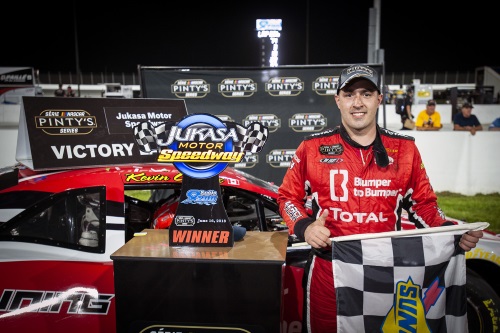 After only 30 laps, Kevin was the fastest driver on the track. After the first pit stop, Kevin was unbeatable for the remainder of the race. Even though there was a lot of action in the field behind, but no other driver competed for his top spot.

It was a problem-free race for the Bumper to Bumper team who used a one-pit-stop strategy during the race. There were two mandatory stops during this event, one at the 78th-lap mark, and the other during the 145th lap, allowing teams to make adjustments to their cars.

“During the first mandatory yellow flag, I gained the first position as the leader came in the pits,” explained Kevin. “I stayed on the track because we had an excellent car for the long run, my tires were in good shape, and the more the race went on, the better the car was going.”

It’s only at the 145th lap that Kevin came on pit road during the second mandatory flag. “We were lucky to have the yellow flag at this particular time because I had a slow leak on one of my tires. We changed all four tires and put gas in the car before the last stretch of the race.”

Kevin wants to thank his sponsors Bumper to Bumper, Total, Go Fast, PFC Brakes and Gates Corporation, a partnership between growing companies that represent excellence, ambition and victory. “I want to thank my partners who allowed me to win for the first time on an oval track.” 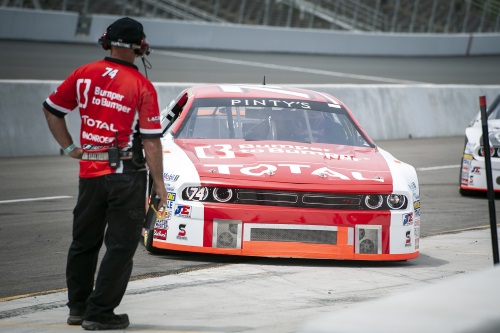