NORWALK, Ohio (June 25, 2018) – The Summit Racing Equipment NHRA Nationals marked the fourth final round appearance in 12 races for Terry McMillen and his AMALIEⓇ Motor Oil XTERMIGATORⓇ Top Fuel team. McMillen defeated defending NHRA Champion Brittany Force in round one of eliminations, Richie Crampton in round two and points leader Steve Torrence in the semi-finals. In the final round, McMillen faced Blake Alexander and led the race to about half track before the car started hazing the tires. Alexander was able to drive around McMillen to score his first NHRA victory.

“We may never win another race,” McMillen said. “But if we keep winning rounds and keep getting to the finals, we have a chance to win the Championship.”

Consistency is something McMillen and his crew chief Rob Wendland have been concentrating on this season. “We have to be consistent and get down the track competitively,” McMillen added. “You can’t take any of these teams out here lightly, it’s a tough field. At the same time we have to constantly work on improving. We tried some new things in Bristol and it just didn’t work out. With the rain here, it was tough to try anything different, so we went back to our proven set-up on Sunday.”

With the final round appearance, McMillen moves back to sixth in the points standings, one round and one point ahead of Antron Brown and about four rounds behind Leah Pritchett for fifth.

The NHRA Mello Yello tour takes a week off before heading to Epping, New Hampshire for the NHRA New England Nationals July 6-8. 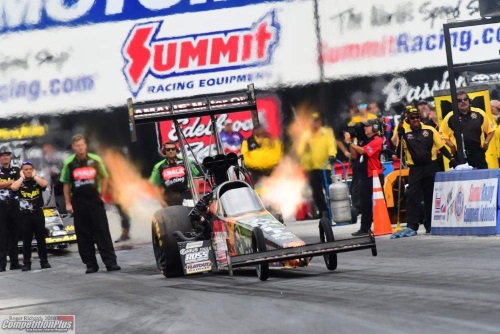