Saint-Eustache, June 25, 2018 – On June 30th, Kevin Lacroix will be on track for the first Quebec NASCAR Pinty’s event at Autodrome Chaudière. It will be for the Bumper to Bumper 300, an event hosted by Lacroix’s main sponsor. It is the first of two events hosted this season by Canada’s most popular automotive parts brand.

After two events, one on a race course at the Canadian Tire Motorsport Park and the other on oval the Jukasa Motor Speedway, Lacroix is in first place in the Drivers’ Championship, five points ahead of Louis-Philippe Dumoulin.

“I am looking forward to returning to Quebec” explains Kevin. “I hope to create a greater gap in my lead in the championship with a second win. Especially at an event hosted by my sponsor.” 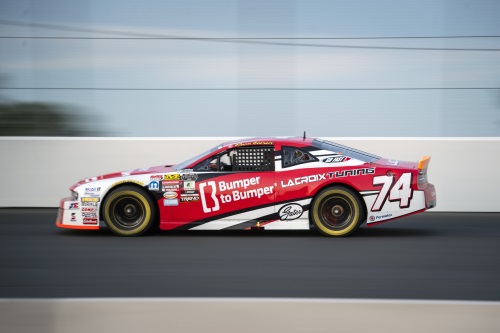 The 300-lap race, that will start at 8 p.m., will have Competition neutralisations, like at the Jukasa Motor Speedway two weeks ago. As we saw during that race, the two mandatory stops caused the pit stops strategies to be highly crucial. During the Rankin Construction 200, Kevin had taken the lead during the first Competition yellow since he had not entered the pits as many had done. This proved to be beneficial and gave the Saint-Eustache native the opportunity to lead the field and to win.

His two participations at the Autodrome Chaudière in 2016 and in 2017 yielded Lacroix a 6th position. Now that his bad luck on ovals seems over, the Dodge Challenger #74 Bumper to Bumper / Total /  Gates / Go Fast /PFC Brakes  driver hopes for victory one more time.