(July 9, 2018) -It has been just over a year since Jak Crawford, now 13-years-old, started racing Legends Cars. His debut series was in 2017 at the iconic and highly-competitive Bojangles Summer Shootout inside the confines of the famed Charlotte Motor Speedway. By the end of that summer, Jak had found victory lane in race number nine of the ten race series and after that initial win, a nearly storybook rookie year. With limited seat time in his #52 Legends Car, Crawford continued to impress even while still splitting time with his high-level, winning karting career.

Now a year later, after four months racing karts in Europe and all the while out of a Legends Car seat, Crawford made his way back to Charlotte, North Carolina. Jak’s first race back was halfway into the 2018 running of the Summer Shootout series but the lack of recent experience would not matter.

It didn’t take Crawford long to warm up again to the Legends Car, the Charlotte Motor Speedway, or his new team, Mark Nahrstedt Race Cars. With Jak’s old and new cars not yet ready to race with Nahrstedt, Jak jumped into the seat of Peyton Saxton’s #5 hot rod and immediately made a great first impression. The racing chemistry was instantaneous with Nahrstedt, Saxton, who handled Jak’s car and spotting duties, and the car itself.

“It was nice to be back in the Legends Car,” explained Crawford. “I enjoy the different kinds of racing I do and the thrill of this type of car and oval racing is unlike anything else that I race. My karting friends don’t understand how hard but fun this car is to race.” 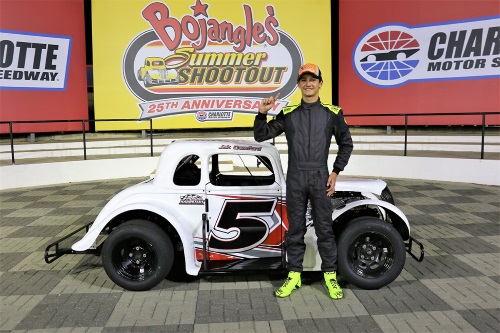 Crawford was one of the fastest amongst all the classes of Legends cars in practice last Monday night, and then for qualifying on Tuesday night, due to the invert, he wanted to find himself somewhere in the middle of the top five or six. Starting from third, Jak slid his #5 car tight in behind the pole sitter for the first few laps waiting for his time to pass, and then he pounced authoritatively, a few laps later to take the lead. Never surrendering the point for the remainder of the 25-lap feature, Jak took the win decisively by nearly three seconds in a stacked field of talented drivers.

“I would like to take all the credit for our great win but it was the best race car I have ever raced in a year of racing these cars,” added Crawford. “If I had this car in my rookie year, I would have won a lot more than I already have. I can’t wait to get back in the car again soon.”

Crawford’s Legends Car schedule for the remainder of 2018 is still being confirmed with his new team, but the young talent heads back to Europe this week for more CIK-FIA karting events.

Jak would like to thank OMP racing gear and Bell Helmets USA for their protective race gear. A big thanks to Legends Car marketing partner Mobil 1, Mark Nahrstedt Race Cars, and Peyton Saxton.