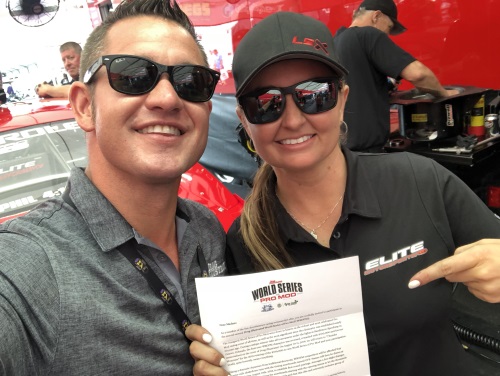 MORRISON, Colo. (July 12, 2018)– A year ago, Erica Enders was drawing names out of a hat and making bets with her team on who would win the inaugural DRAG ILLUSTRATED World Series of Pro Mod.

This year, she’s betting on herself.

The two-time Pro Stock world champion has officially thrown her name into the hat as a participant in 2018, as Enders will compete Aug. 10-11 in the World Series of Pro Mod at Bandimere Speedway.

Enthralled with the high-stakes, winner-take-all Pro Mod action of the inaugural race in 2017, Enders, who made her NHRA Pro Mod debut earlier this year, literally jumped at the opportunity when handed the invitation by Drag Illustrated Founder and Editorial Director Wes Buck.

“I was so excited. I was jumping up and down like a little kid. I’m super stoked,” Enders said on Buck’s Facebook Live show. “It was so exciting watching the live feed and the craziness that the race was, and to now be a part of it, I’m so excited and so honored.”

Oddly enough, Enders drew WSOPM winner Mike Bowman’s name out of the hat during her team’s friendly wagers a year ago, though her prize fell well short of the $100,000 Bowman took home in 2017.

Enders would love to be the one to win the six-figure payout this year, but just her participation in 2018 is a massive win for the WSOPM, according to Buck.

He first floated the idea of having Enders involved to Elite Motorsports team owner Richard Freeman a year ago, something that became feasible with the team’s official Pro Mod debut in Houston earlier this season.

Jumping in the burgeoning Pro Mod class is something Freeman has been interested in, and when Enders looked impressive driving the team’s turbocharged RJ Race Cars Camaro – to the surprise of no one – the idea gained traction. Enders officially accepted the invitation weeks later, adding another marquee name to the incredible list of participants scheduled to compete at the biggest and richest Pro Mod race in the history of the known universe.

“This is a big deal. You’re talking about a two-time NHRA Pro Stock world champion and inarguably one of the great racecar drivers of all time,” Buck said. “Erica is one of the biggest stars our sport has and her presence, without question, is a difference maker. Erica’s presence, for me, is a promoter’s dream. She’s the type of person we want involved in this race. For her to even know what the World Series of Pro Mod is, let alone be entered to compete, it’s a dream come true.”

The reality is the weekend will be a serious challenge for Enders, who has 23 career Pro Stock wins and is the current points leader.

It will be her first time racing on “Thunder Mountain” in a Pro Mod car and also comes during a stretch of five consecutive race weekends following the NHRA’s Western Swing and preceding the NHRA stop in Brainerd.

But that’s the type of challenge that drives Enders, who has always thrived under pressure. That mindset and big expectations won’t change for the standout at the WSOPM, even if she is in the infant stages of her Pro Mod career.

The huge winner-take-all prize and the scoreboards being shut off during shakedown runs add to the challenges of the weekend, but Enders welcomes it with open arms.

“I’m excited about it and like I’ve said a million times in interviews, the big rounds, the high- pressure situations, all of that stuff, I feed off of it,” Enders said. “I would rather it come down to something like Pomona, winner take all. Big rounds, big pressure, we thrive under it. I love that stuff.

“The group of guys on this team is absolutely amazing. When the pressure is on we step up together and really cool things happen. They make me better and we have the coolest team in all of motorsports in my opinion.”

Jumping into a loaded Pro Mod class won’t be easy, but Buck believes Enders, who has a win and three final round appearances in 2018, could have a tremendous impact on what takes place at the WSOPM.

“There’s not a single competitor that won’t be hyper-aware of where she is on the ladder,” Buck said. “That team, they don’t know how to do anything other than at a world championship level, and they wouldn’t have dived in and gotten involved in the class if they didn’t have intentions of running at the front.”