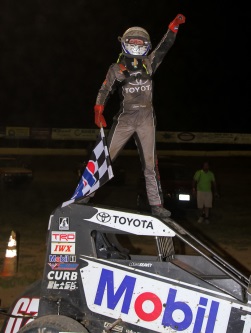 The victory is the second of the season for Seavey in USAC competition and his fifth overall national midget feature win in 2018. The 21-year-old USAC national point leader will make his NASCAR Camping World Truck Series debut in a Toyota later this week at Eldora Speedway.

Starting seventh, Seavey methodically moved his way up through the field, gaining one position on the opening lap and remaining there through the first 16 circuits as Bodine and Seavey’s Keith Kunz Motorsports (KKM) teammate Tanner Carrick dueled it out for the early lead. The 16-year-old Carrick eventually moved past Bodine for the lead on lap five and would hold it until lap 12 when Bodine was able to reclaim the top spot with Brady Bacon in tow to take over second.

The top three were able to hold down those positions through lap 23 when Seavey worked past Carrick for third. At that point, the Sutter, Calif., native, set his sights on fellow Toyota driver Bacon by working the bottom of turns one and two and then going high through three and four. He eventually overtook Bacon for second on lap 27.

For the next 10 laps, Seavey worked a number of racing lines as he closed on Bodine, while behind him teammate Ryan Robinson had moved into third, with Bacon in fourth and Christopher Bell having worked his way into the top five. Finally on lap 37, Seavey would dive underneath Bodine to take the lead and then drive off to the victory. Bodine placed second, with Robinson finishing third and Bacon fourth.

“We ran second every night this week and it was frustrating,” said Seavey after three consecutive runner-up finishes. “I was just trying to get a run at the top, and I was able to sneak under him. I was down before the feature, but I had a lot of fun out there. In the other races I was leading early, but it’s a huge advantage to run second and you’re able to find the best line. Thanks to everyone at KKM, Toyota and Mobil 1.”

Seavey’s win is the 25th national midget feature victory this year for Toyota with six of those coming in USAC competition.

The USAC P1 Insurance National Midget series will take the next two weeks off before resuming with the kickoff of Pennsylvania Midget Week at Path Valley Speedway Park in Spring Run, Penn., on August 2.