Toronto (ON) (July 16, 2018) – Kevin Lacroix was unlucky during the Pinty’s Grand Prix Toronto, held during the Toronto Indy weekend. The urban track was not meant to be for the Saint-Eustache native as he retires from the NASCAR Pinty’s race.

During qualifying, Lacroix scored great lap times, but a miscalculation from the driver resulted in a crash, destroying the #74 Bumper to Bumper/ Total, Gates/ Go Fast/ PFC Brakes car. Lacroix was taken to the track medical center but was released shortly after.

The Bumper to Bumper team didn’t lose their spirit and turned to Scott Steckly’s team who had a spare car. The team worked all night to get the Chevrolet ready for Saturday’s race. The car was not up to the team’s standard, but considering the turn of events, it was satisfying enough. Because of his crash during qualifying, Kevin started the race from the back of the field. 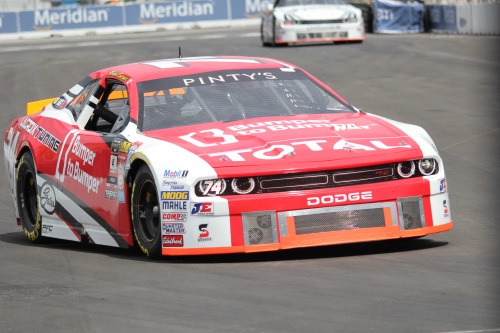 During the first lap, Lacroix’s bad luck wasn’t over as he suffered a punctured tire, which caused him to pit early. A few laps later, it was a mechanical failure which was caused by a problem in a cylinder. With the car being less powerful than the other ones on the track, Lacroix stopped on pit road once again, but this time to fix the mechanical issue.

Back on the tack with a competitive car, Lacroix set the same time as the leaders. Hoping for a Top 5-finish rather than a podium, Lacroix was running in 7th place in the last few laps before a caution flag came out.

At the restart on the 30th lap, he suffered yet again another puncture, preventing him from finishing the race.

“It’s definitely a weekend to forget,” shared Kevin. “After Friday’s accident, we were lucky to find another car, but it wasn’t set to my liking. It is not easy to take an unknown car and to do a race with it without extensive work and testing. Back home we will do private testing to put the car up to my standards.”

Kevin is now 7th in the Driver’s Championship, 22 points behind the current leader. 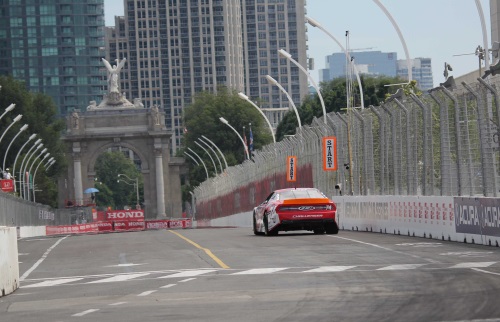