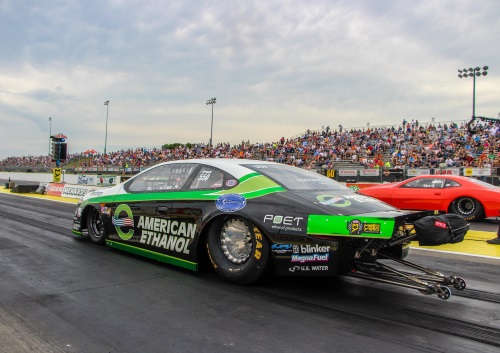 DENVER – After gaining some much-needed seat time behind the wheel of the American Ethanol 2017 Dodge Dart Pro Stock car in Topeka, longtime sportsman racer Will Hatcher looks forward to the Dodge Mile-High NHRA Nationals powered by Mopar this weekend in Denver. This will be his second time competing in the NHRA Mello Yello Drag Racing Series.

“It’s really cool to get to race a Dodge vehicle at the Dodge Mile-Highs,” said Hatcher. “And the track in Denver is just fantastic. I’ve raced my Comp Eliminator car here more times than I can count. The Bandimere family does an outstanding job with this facility and we see so many hardcore racing fans packing the stands. I’m really looking forward to this!”

Hatcher’s Mopar HEMI-powered Dodge, formerly driven by Pro Stock racer Deric Kramer, had a respectable first showing in May as he learned just what it takes to run in the highly competitive Pro Stock class when he narrowly missed colliding with the wall in the first round of eliminations. But a learning curve was to be expected and he enjoyed every minute of the experience.

“It was pretty surreal to get behind the wheel of a Pro Stock car and compete in the Mello Yello Series, lined up next to some of my heroes,” said Hatcher. “Thankfully, Deric Kramer and his entire crew were there to help me every step of the way. We got the car down the track and learned a lot, so I feel good going into this weekend. And I’m glad to have our Kansas-based sponsors on the car again this weekend – Fry Eye Associates, Billy’s Blue Duck BBQ and Conestoga Energy.”

Hatcher will be participating in the highly-anticipated and popular Mopar Big Block Party Presented by Pennzoil on Thursday, July 19 from 6 to 10 p.m. MT as well as an autograph session on Saturday in the midway.

ABOUT WILL HATCHER
Will Hatcher is a second-generation NHRA drag racer and has participated in the Lucas Oil Drag Racing Series since 2003. His relationship with NHRA, however, began at the age of 10, when Hatcher began competing in NHRA Junior Drag Racing, winning his first event in 1994. Most recently, his drag racing success resulted in winning the 2017 Division 5 Lucas Oil Drag Racing Series Champion in Comp Eliminator. As the old saying goes, “Luck is when preparation meets opportunity,”

Hatcher has been prepared for an opportunity to run Pro Stock. He received his Pro Stock license in 2012, so when he received a call from the Kramer family earlier this year asking if he would be interested in running their Dodge Pro Stock machine at a few events, he was more than ready to take on the challenge. Hatcher’s sponsors are all Kansas-based companies: Fry Eye Associates, Billy’s Blue Duck BBQ and Conestoga Energy.