MORRISON, Colo. (July 23, 2018) – Terry McMillen and his AMALIEⓇ Motor Oil XTERMIGATORⓇ Top Fuel team struggled with the heat and high elevation of Denver. McMillen qualified 12th and suffered an opening round loss to Richie Crampton. He remains seventh in the points standings.

“It always good to visit Denver,” McMillen said. “It’s just so dry and so hot. It’s just a battle from the time we get here until the time we leave. We still struggle with the right combination for the thin air up here.”

The next stop on the NHRA Western Swing is Sonoma, California, where McMillen hopes to get back to winning rounds. The 2017 season saw McMillen make a semi-final appearance in Sonoma. “I’m excited to get back to sea-level conditions,” McMillen said as he headed west. “We made up some ground last year on the last two races of the Western Swing. We’re hoping to improve on what we did last year.”

McMillen lost to Antron Brown in the Sonoma semi-finals and lost on a holeshot to Brown again in the Seattle final round. 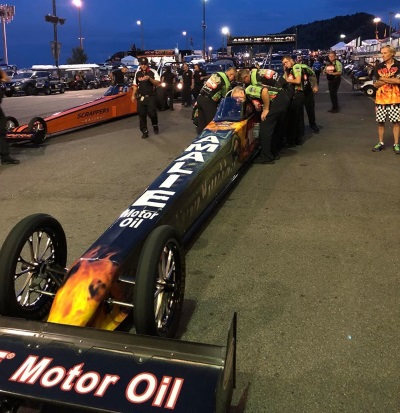