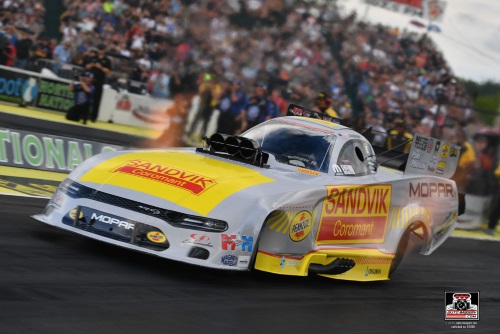 KENT, Washington (August, 4, 2018) – Matt Hagan leads the Funny Car class after day one of qualifying at the CatSpot NHRA Northwest Nationals at Pacific Raceways, located just outside of downtown Seattle. Hagan posted a 3.913-second run at 324.75-mph in his Sandvik Coromant Dodge Charger SRT Hellcat during the second qualifying session to take the preliminary No. 1 position.

Before powering to the best run of the day, Hagan made an impressive pass in the opening round, lighting up the scoreboard with a 4.008 at 320.81-mph. The run held up to be second-best of the session.

Hagan credits the team’s new Dodge Charger SRT Hellcat body, which made its competition debut just two races prior at the start of the ‘Western Swing,’ for a large part of the Sandvik Coromant team’s success on Friday.

“Right now, it’s all about dialing the car in and dialing this new Hellcat body in with the headers and everything else we’re doing. It’s going to take a few runs but all in all, I feel like (crew chief) Dickie (Venables) has a really good handle on it,” said Hagan, the 2013 Pacific Raceways Funny Car event champion.

“We’ve been really impressed with the aerodynamics of this body; it’s been running strong. The drivability is really good. We’re able to take a lot less drag off of the car, and it’s responding to what we want to do.”

Hagan, who is currently sporting the Sandvik Coromant colors for the third time this season, also believes a little bit of luck may have come into play. His most recent pole was during the NHRA New England Nationals in Epping, N.H. where he also bannered the Sandvik Coromant brand. He went on to race to victory from the No. 1 spot that weekend, his third of three 2018 event wins so far.