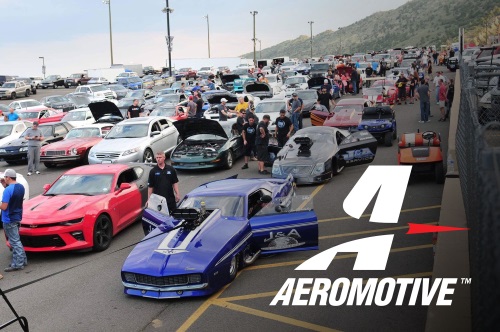 Aeromotive’s partnership with the World Series of Pro Mod will include a unique aspect leading into the race that will award $100,000 to the winner. Aeromotive has purchased 500 event tickets (valued at $30 each) and will hand them out on Wednesday at Bandimere Speedway as part of the track’s Colorado State Patrol “Take it to the Track” test night.

The test and tune on Thunder Mountain draws hundreds of participants each week, as the “Responsible Speed” program created by the Colorado State Patrol and Bandimere Speedway provides a controlled, safe and fun drag racing opportunity to all Colorado drivers. By handing out complimentary tickets during the test and tune night, Aeromotive is giving race fans and competitors in the weekly series a chance to watch the biggest and richest Pro Mod race in the history of the known universe free of charge.

“We’re always advocates of bringing youth out and helping give them a vision about what they can do in the sport,” Aeromotive President Steve Matusek said. “I really love the fact of trying to give something back to the young racing enthusiast. They’re out there for the test and tune, and now they can get up close and personal with the highest level of doorslammer racing with the World Series of Pro Mod. This is a passionate sport and industry, and we’re trying to bring people into it and to this race that are passionate.”

“It’s no surprise Steve and everyone at Aeromotive jumped at an opportunity like this,” Buck said. “They’ve always shown an extreme passion for introducing the sport and getting people involved. We want to put a couple tickets in the hands of everyone who buys a tech card on Wednesday and personally invite them to the World Series of Pro Mod. Our mission from day one at Drag Illustrated has been to build and grow the sport of drag racing, spotlighting the next generation of racers and going wherever they are. This is one of those events and we’re proud to partner with Aeromotive to provide tickets at no charge for those who race at the Colorado State Patrol ‘Take it to the Track’ night.”

Aeromotive, an industry powerhouse in the world of performance fuel systems thanks to its constant innovation, remains a steadfast supporter of the World Series of Pro Mod and Matusek will also be part of the all-star lineup of competitors at the event for a second straight year. By offering the complimentary tickets on Wednesday, Matusek also hopes to treat them to a memorable show during the weekend against a lineup of the top Pro Mod drivers in the country.

“This is a once a year event and it’s growing and continuing to gain in popularity,” Matusek said. “To have a unique event and offer a unique experience with a format that nobody else has in drag racing, it will be exciting to give these racers a chance to experience it.”