Brown opened the day with a win over Shawn Reed to set up a second-round matchup against teammate Tony Schumacher. Both cars smoked the tires early, but Brown recovered quickly to win the pedalfest. In the semifinals, he would face Steve Torrence in an epic matchup. Brown had a 0.020-second advantage at the light, then held off Torrence to win on a holeshot by 0.009 seconds.

In the finals against teammate Leah Pritchett, Brown took the immediate lead and never trailed for his third consecutive Seattle victory. The final margin of victory was 0.0047 seconds (approximately two feet) and enabled Brown to capture the elusive 50th Top Fuel victory he has sought since Brainerd 2017.

“It’s no secret that we struggled at the beginning of the year,” said Brown, who joined Schumacher, Larry Dixon and Joe Amato as the only NHRA drivers to win 50 Top Fuel events. “We lost (crew chief) Brian Corradi, and then we had a lot of our team moving around, so they’ve had to gel in new spots and positions. Our main focus has just been to get better every race and learn this new combination and how to make it work.

“We were good in Sonoma; we were good in Denver, we were good in Virginia. We were just losing close races. We used to be on the opposite side, and today all of the win lights turned on for our team. I couldn’t be more proud of my Matco Tools/U.S. Army/Toyota guys in how persistent they’ve been throughout the year. Now it’s happening at the right time with the Countdown approaching. Our car is showing it. We’re qualifying in the top five, and we just want to keep doing it. ‘Top three’ is our goal, but we’re going for the number one spot. Now we have a shot to move up a spot or two, and that really will help us in the Countdown.”

Along his way to the winner’s circle, the four-time Pacific Raceways event champion defeated Jonnie Lindberg, teammate Matt Hagan and powered to an impressive pass on a bye run during the semifinals to earn lane choice in the final round. The final, Capps’ 117th, was a battle of the NHRA Countdown to the Championship points leaders with No. 2-ranked Capps facing No. 1-ranked Courtney Force.

It was a nail-biter of a race against Force with both drivers nearly even leaving the starting line. Capps and Force kept pace with each other until just before the finish line when the Pennzoil Synthetics/NAPA AUTO PARTS Dodge surged ahead for the win. Although Capps wasn’t able to close in on Force’s point lead by much, he was able to prevent her from widening the gap.

“They’ve got a target on their back,” said Capps of Force and her team. “They are the points leaders, obviously. We’re trying to make ground up on them, and you can’t do that when she’s next to me in the final round, you just get 20-points. But, it’s going to be fun. We’re just shooting to be as high as we can in points during the regular season, and they’re going to be tough.”

In defeating Force, Capps and the Pennzoil Synthetics/NAPA AUTO PARTS team was able to prevent John Force Racing from ‘sweeping’ the Western Swing by earning all three of the swing’s Funny Car Wally trophies.

“I’m in the waterbox, and there’s Don Schumacher, and all I’m thinking is they’re going to try and ‘sweep the swing.’ I was on the bad end of those (two final rounds) in Denver and Sonoma, so more than anything, I wanted to end that for Don. That was in my head, ‘don’t let John Force sweep the swing in Funny Car,’ so I’m glad we could put a stop to that.”

It was a quintessential Rahn Tobler/Ron Capps performance that allowed the duo to pick up their 24th win together on Sunday afternoon. It was at Pacific Raceways in 1995 where Capps claimed his first professional win, his only Top Fuel victory. Capps was nostalgic as he recalled a day he considers a crucial turning point in his career.

“I won here in 1995. It was on a Tuesday. I was in an unsponsored car, I borrowed money for a firesuit, and Pennzoil was on my suit, my mom sewed it on. That was a big moment. I’ve been here many times and have been able to win in Funny Car, but that was a fateful day. From what (former team owner) Don Prudhomme told me, that was the day he started watching me on the track, how I drove, the way I carried myself. That day probably propelled me to the next step of getting a phone call from Don ‘The Snake’ Prudhomme, and from there led me to be able to drive for Don Schumacher. I’ve driven for two of the biggest names in the sport, represented three Fortune 500 companies in my 20+-year career. I love racing cars, I live for it, so it’s neat to come full circle and stage the car in that same lane where I won on that Tuesday.” 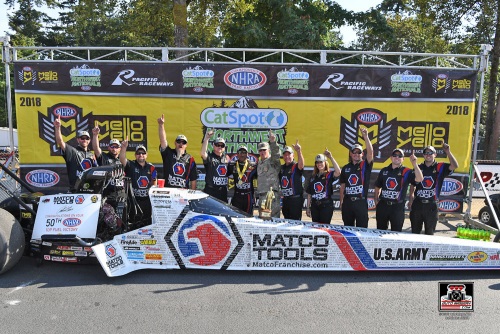 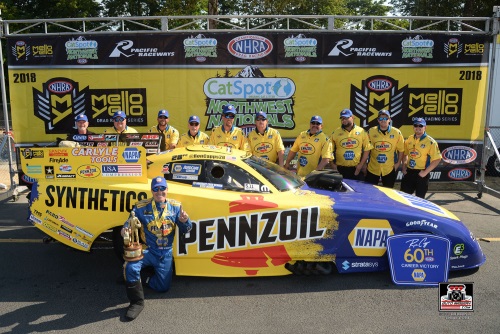 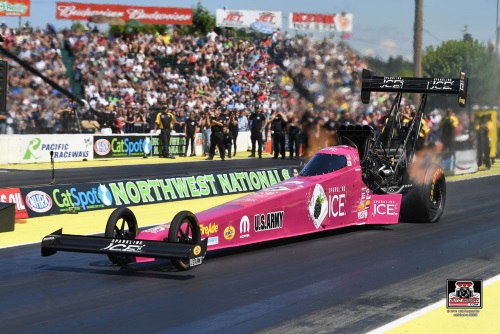 Race Recap:
Pritchett qualified the Sparkling Ice dragster sixth and raced to the final round, starting with a gutty first-round win over Troy Buff. She scored a holeshot victory with her lap of 3.809-seconds at 325.53-mph besting Buff’s pass of 3.798-seconds at 315.71-mph.

Pritchett used another consistent run of 3.823-seconds to defeat Clay Millican in round two for the second time on the swing to advance to the semifinals. Upset-minded Mike Salinas was the next competitor trying to stop Pritchett and her black raspberry-hued machine. Salinas had the initial jump, but Pritchett drove around him to claim the win with a pass of 3.838 seconds at 304.74 mph. The victory secured a second final round appearance during the Western Swing, and Pritchett’s first at Pacific Raceways.

Quotable:
“I feel phenomenal about the car, the team, the headspace and the momentum. Today was a great way to finish off the Western Swing. Of course, we were just one round shy of the ultimate finish to it, but my proudest moment of the weekend wasn’t even the win lights. It was the ability this team had to overcome the insane challenges we had facing us after the semifinals. We had engine damage. We had blower damage and the confidence (crew chief) Tod Okuhara had using a blower that never had any type of boost put to it before for the final round should how good he is. When you change a blower there could be at least 15 other things that are affected, so you just don’t know what to expect. From burnout to turnout, this was basically a new machine compared to what we had all weekend long. So to show out as well as we did in the final was very impressive. I’m very proud to be part of this team and we’ll continue this momentum on to Brainerd.” 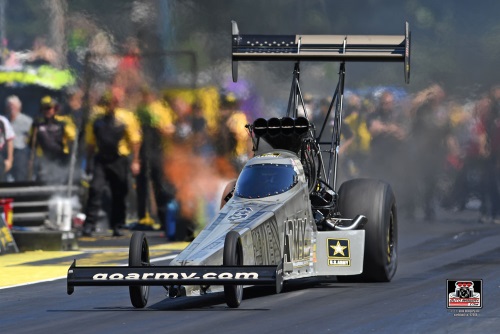 Race Recap:
After making four solid runs during qualifying, last week’s runner-up started from the No. 4 position and faced Terry McMillen in the opening round. Schumacher had the quicker reaction time, and despite hazing the tires, never trailed for the win against McMillen who was up in smoke early into the run.

In the quarterfinals, Schumacher drew teammate Antron Brown. Both drivers smoked the tires at around the same time, and both veteran pilots were on and off the throttle. Brown was able to get his rail to hook up enough to take the win, ending Schumacher’s day at the quarterfinals.

Quotable:
“Smoked the tires twice today after four beautiful runs during qualifying. It kind of caught me off guard a couple of times. It was a rough one. Hate to give up any points, we were doing so well, but I look forward to getting to Brainerd, and to Indy test, and getting into that Countdown. We’ve got a great car, but we haven’t had very much luck. When that luck finally turns, it’s going to be a stout deal.” 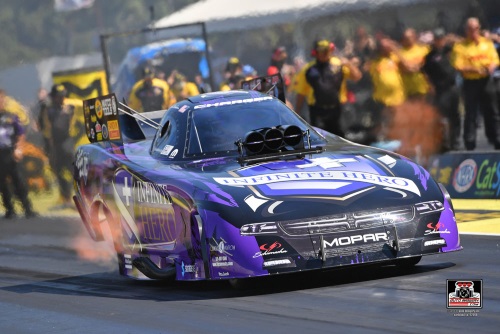 Race Recap:
The 2007 Pacific Raceways Funny Car champion faced Shawn Langdon in round-one of eliminations. Beckman was 2-0 versus Langdon in prior events but was unable to extend his lead on Sunday morning. The two world champions were nearly even after launching from the line with the Infinite Hero Dodge keeping pace until the 660-foot mark when Langdon was able to pull ahead for the round win.

Quotable:
“I would rather win ugly, in other words smoke the tires but get down there and get the win light, than run fast and lose. Losing is never what we want to do and we’ve lost pretty the last few times out. I think the carrot on the stick for us is that even when our car doesn’t run what we want it to run, it runs respectively. That tells me that we’ve got it back in the tune-up window where we ought to be able to start stepping on it and running quicker. Right now, we’re just trying to control clutch wear. It’s a problem that every nitro car has. I definitely have reason for optimism. This is only our third first-round loss this year and that underscores how consistent our team has been. We need to ratchet it up a notch, qualify better, get a better first-round matchup and capitalize on that.” 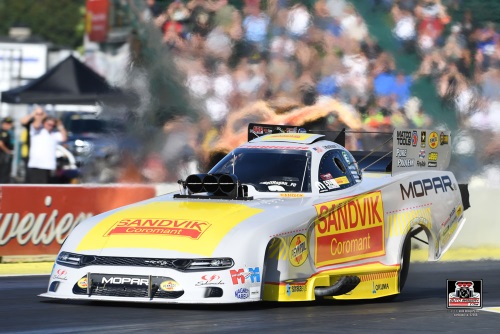 Race Recap:
With his first Pacific Raceways No. 1 qualifier, Matt Hagan earned the advantage of lane choice to start Sunday versus his first-round opponent, Cruz Pedregon. In his Sandvik Coromant Dodge Charger SRT Hellcat, Hagan eclipsed Pedregon at the 60-foot block and charged down the track for the decisive win.

In round two, the 2013 event champ faced teammate Ron Capps. It was a very close race between the two Pennzoil-powered Dodges, but Capps was able to set off the win light, ending Hagan’s chances at picking up his fourth victory of the season.

Quotable:
“Great qualifying position with this new Mopar Hellcat body. There’s a lot of tough draws out here, we had Cruz (Pedregon) first-round, (Ron) Capps second-round, and none of them are easy. Capps and the Pennzoil/NAPA team have had our number for the last few races. They ran strong beside us, he had a good light, and that’s just a hard combo to beat right now. Their car is running well; our car is running well too. It was a good drag race; we just happened to be on the back side of it. We’ll move on to the next one and hopefully do big things at (the next event in) Brainerd.” 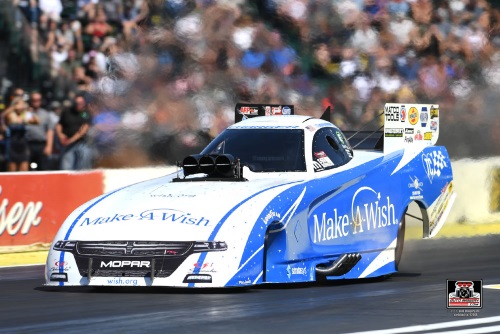 Race Recap:
It was an all-John Force Racing day for Tommy Johnson Jr., who picked off John Force and Robert Hight, before succumbing to Courtney Force in the semifinals.

Johnson was quick on the throttle and had the starting line advantage against the elder Force. Both drivers had issues – Force lost traction and Johnson had a hole out, but Johnson charged on in the Make-A-Wish Dodge and crossed the stripe first.

In the quarterfinals, Johnson defeated the reigning world champion with a 4.074 versus Hight’s 4.551. Johnson, who has wins in both Top Fuel (career first) and Funny Car at Pacific Raceways, had the better reaction time versus C. Force, but Force was able to pull ahead before the 330-foot mark and drive away with the win, ending Johnson’s chances for a second consecutive Northwest Nationals final round appearance.

Quotable:
“Sure, we would’ve liked to win, but two semis on ‘the swing’ is not bad. It’s important right now to get the points. The Countdown is coming, and the Make-A-Wish Dodge is improving every race, and we’re doing better every race, so if you’re going to peak, it’s getting close to the right time to peak.”