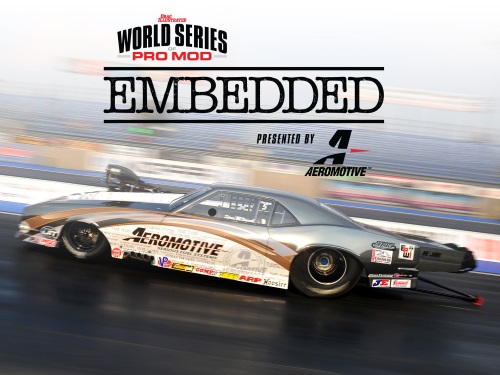 MORRISON, Colo. (Aug. 7, 2018)– The race coverage for the DRAG ILLUSTRATED World Series of Pro Mod, which takes place Friday and Saturday at Bandimere Speedway, will get even better as race officials announced today that Aeromotive, Inc. has been named the sponsor of the World Series of Pro Mod’s “Embedded” vlog-style video series.

World Series of Pro Mod Embedded presented by Aeromotive will give fans unprecedented, behind-the-scenes access in the days leading up to the $100,000 winner-take-all event. The video series will include six comprehensive, high-quality videos in a vlog-style format starting Monday and continuing each night through the conclusion of Saturday’s final eliminations.

A team of videographers will be following Drag Illustrated Founder and Editorial Director Wes Buck, race officials, and WSOPM participants and their teams to provide the vlog-style videos, offering the most in-depth access possible for the event. The videos will be available each evening on YouTube and Facebook, giving fans the ultimate VIP video pass to the highly anticipated race.

“This is the ultimate passion project for me and we are thrilled to see Aeromotive share the same passion in this video series as myself and everyone at Drag Illustrated,” Buck said. “At the root of this is the fact I’m the biggest drag racing fan and the biggest Pro Mod fan in the world, and I want to use this embedded video series as an opportunity to provide fans backstage access to the biggest and richest Pro Mod race in the history of the known universe.”

As buzz reaches a fever pitch for the race, World Series of Pro Mod Embedded presented by Aeromotive adds another layer of access to the event. In addition to the “Selfie Video” and “Action-Replay Video” coverage during the World Series of Pro Mod, the embedded series will give fans and viewers a direct link to all the happenings leading into the weekend, including the three-day test session as teams prepare their cars for the biggest race of the year. It will then follow Buck through the two-day event, going behind-the-scenes all the way to the winner’s circle and the $100,000 payout to the winner.

“The backstory is sometimes just as intriguing as the race and we’re excited to be a part of this video series for the World Series of Pro Mod,” Aeromotive President Steve Matusek said. “The sacrifices, the personalities you’re dealing with, everything that’s involved, these videos will shed some light on the backstory and give people complete perspective on what it takes to make these events successful. These racers and teams want to be here because it’s a historic event and if people sees what goes into it, I think they will be amazed.”

“There’s so much that goes on behind the scenes and people love the chance to look behind the veil and see that,” Buck said. “It’s really an opportunity to set a trend, to do something first and turn it into the norm for a big event. It helps the event live on forever, and Aeromotive’s involvement live on forever.”