Jerry Coons Jr., Windom’s teammate on Gene Nolen’s Whiteland, Ind.-based team, won the ProSource pole and finished fifth in the field of 30 drivers who qualified for one of the most prestigious events for USAC’s top class.

It was a “home” race for Windom, who is from Canton, Ill. and currently lives in St. Louis.

Coons is a native of Tucson, Ariz. who now lives in Greencastle, Ind.

Both drive Maxim chassis powered by Tranter-prepared Chevrolet engines, and their cars are sponsored in part by KECO Coatings and Indy Race Parts.

There were three leaders. Tyler Courtney led laps one through 44; Kevin Thomas Jr. led laps 45-49; Courtney headed the field again from laps 50 through 54; Thomas was in command from laps 55 through 91, and Windom led laps 92 to 100, including the only one that mattered. 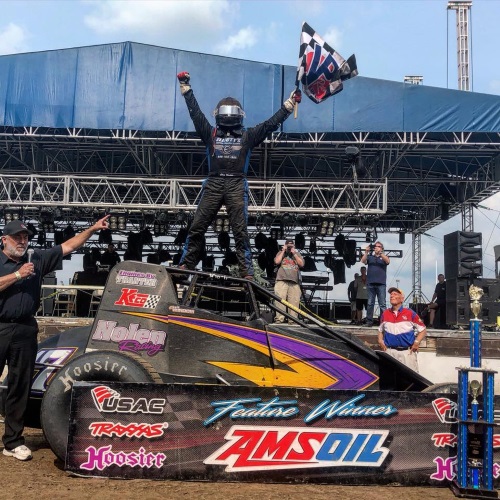 Windom said his starting spot was largely due to “a tough draw in qualifying, going out 40th.” But he was confident that he had a mount that was up to the job, and he said the team didn’t make many changes after qualifying.

Once the green dropped on the 100-lapper Windom passed three cars on the first lap to rise to tenth, and he was fifth after the first of five full-course cautions from laps four through six.

He moved into fourth place on lap 12 and remained there through the second yellow from laps 23-26, but dropped four positions on a restart on lap 27 and had to regroup from eighth place. He moved into seventh on lap 31, vaulted back into fourth on lap 39, lost a position for half a minute on lap 40, and was back in fourth on lap 41. He remained in fourth place from laps 41 through 81, advancing to third right before the fourth yellow waved on lap 83. He leaped into second place on the restart on lap 87, and then took the lead by powering under Thomas on the backstretch working lap 92.

There was a final yellow on laps 97 and 98 but under USAC rules the race must finish under green. Windom took it all in stride and was 1.701 seconds ahead of Thomas at the checkered. Grant, Jacob Wilson and Coons rounded out the top five. 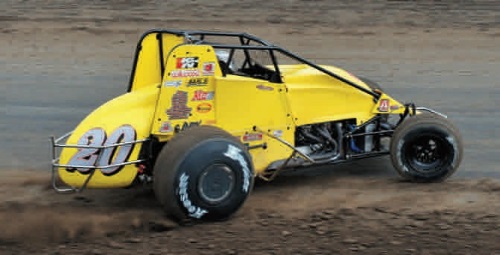 Coons was the first driver to post a time during qualifications. He laid down a lap in 30.875 seconds and he stayed in first place throughout the session, winning the pole at Springfield for the second consecutive year. (Windom qualified 13th Saturday with a 32.341.) Coons’ pole-winning time on Saturday was 0.253 faster than the time posted by the driver who started second, Kody Swanson, who is the winningest driver in USAC Silver Crown history and who had won the last five events.

Courtney and Thomas got around Coons in the early portion of the race, as did Grant a little later. Windom passed Coons on lap 12 to push him back to fifth, and then Coons had to battle Shane Cockrum for that position. He fell back to ninth on lap 27, but soon he was eighth again, following Windom. Windom and Coons ran in fourth and fifth place near the halfway point, but then Swanson wiggled between them around that point to push Coons back to sixth. Coons was eighth again with 20 laps to go, and moved back into sixth when C.J. Leary and Cockrum had problems shortly thereafter. He set his fastest lap of the race just five laps from the finish with a time of 34.356, which was the eighth-fastest lap run. He moved back into fifth when the fourth-place driver, Courtney, had mechanical difficulties in Turn 3 on lap 97 to bring out the final yellow, and Coons went on to finish fifth. He was 0.733 behind the fourth-place finisher, Wilson, and 0.972 ahead of the sixth-place finisher, Kyle Robbins, at the checkered. 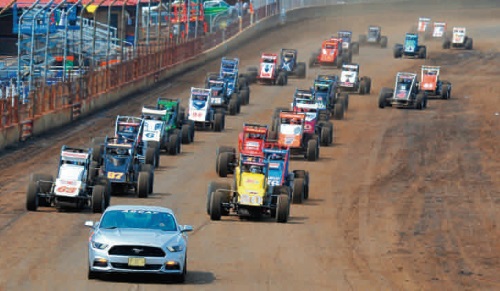 Jerry Coons Jr. (No. 20) leads the field on the pace lap of the Bettenhausen 100. (Gene Crucean photo)

Windom and Coons, who are both former series champions, now both have seven USAC Silver Crown career victories.

Windom is now third in the point standings and Coons is fifth heading into the next race, which is the Ted Horn 100 Sept. 2 in Du Quoin, Ill.

Chris Windom: “This is a race I’ve been wanting to win for a long time. This car was so good today! I knew we were as good as the leaders. We got to them at the end. The guys over at Nolen Racing gave me an awesome car. It was nice to win one on my mom’s birthday. Last race I said we’re not going to win the championship, but we’re going to spoil some of these guys’ runs and win one or two, and today we did!

“I’m so happy to finally get a win here for myself and Gene Nolen. We have had a rough season, but after a second last week and a win this week, it definitely gives the team a lot of confidence after working so hard. We are going to keep digging and try to win as many more as we can this year.”

Gene Nolen (team owner):  “Springfield was the only active mile track that we hadn’t won on. Chris was great!”